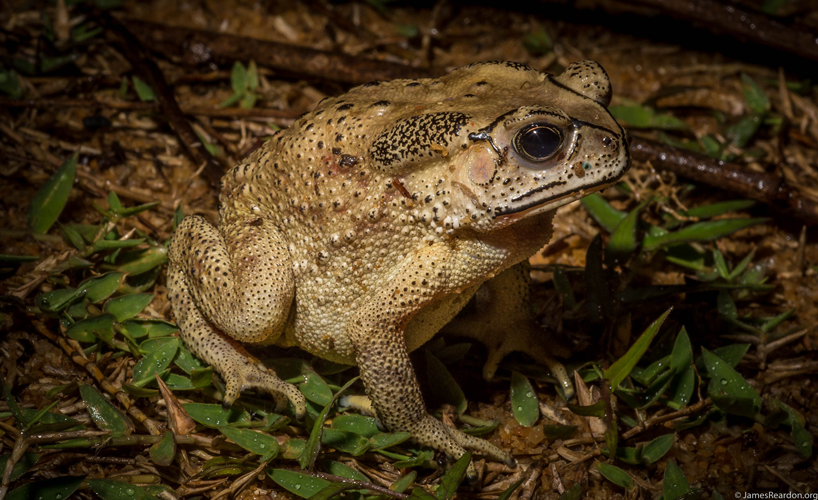 Much like its distant relative, the Cane Toad, the Asian Toad is highly fecund, producing up to 40,000 eggs per clutch. It is poisonous, has a generalist diet and is well adapted for life in agricultural and urban areas. The presences of the toad came to the attention of the Alliance in 2014 and we immediately started working with experts in eradication and our partners to better understand the threat and decide on next steps.

When the teams got to the field to undertake an eradication feasibility study what they found wasn’t good. The report published in early 2016 tells the story of how the Asian toad has been spreading unchecked through the eastern part of the Madagascar with the potential to have a direct threat not only to the country’s biodiversity, but to human health and the economy. Based on all available information it appears the toad arrived in Madagascar from south-east Asia between 2007-10, but it was not properly identified until 2014. The population is now estimated at around 4 million toads covering an area of some 100kmsq and expanding at a rate of 2km a year. The site of incursion is adjacent to the port city of Toamasina but interestingly they have not been detected at the port itself. What this tells us is the port was not the point where the toad first escaped. Although there are still a lot of questions needing answered it seems pretty apparent that if the toads are not eradicated they will continue to spread over the majority of Madagascar causing havoc to the fragile biodiversity of the country.

“The Asian toad can spread across most habitats with no obvious barriers. However, it is currently restricted to about 110 sq km, which gives us hope that we can contain it, but only if we act now,” said James Reardon, an eradication expert with New Zealand’s Department of Conservation, and co-author of the report.

“If the toads become established in the Pangalanes canal system — one of the longest manmade canals in the world — eradication will no longer be an option, and they will likely cause ecological damage similar to that of the cane toad in Australia.”

So what are the next steps? Well, a team of experts launched a series of eradication trials in January 2016 to find out what might be the best way to remove the toads from the wild. A number of options appear to being working, including manual removal, trapping with drift fences, tadpole trapping, and most promisingly spraying them with citric acid, which has resulted in a 100% mortality rate.

With this knowledge we stand a chance of being able to remove these toads and prevent them spreading throughout Madagascar. However, this isn’t going to be cheap. The eradication feasibility report put the cost of the eradication program at $2m-$10m, and this price tag will keep going up.

One question we still haven’t answered completely is how did the toad get to Madagascar in the first place, or perhaps another way of putting it.. Who is responsible for making sure this invasive species is removed from the country?

Many people see the arrival of the toad being directly linked to the development of Ambatovy Processing plant that is south of the port city and pretty much in the center of the incursion site. On this possibility James Lewis, of the ASA says “We are extremely concerned with the current situation. Based on all available information it appears that the toad arrived in Madagascar sometime between 2004 and 2011. Internal emails from Ambatovy staff seem to indicate they were aware of the increasing toad numbers over the three years preceding 2014 and acknowledge that they may very well have played a part in the introduction of this species.

We are continuing to look for other potential routes of entry that could have lead to the toad arriving in Madagascar but have found no other substantial leads as yet. When you look at the area most likely the center of the incursion area there appears to only be a couple of significant business in the area between 2004 – 2011 and as far as we can tell only one that that was importing materials from outside of Madagascar – Ambatovy. Port records would provide a major insight into who was importing materials from Southeast Asia during the potential arrival of the toad. If we had this information, then we would have even more information on how the toad might have arrived. Requests have been made to both Ambatovy and Sherritt for this information but until now it has not been provided. If the arrival of the toad was a direct result of the development of the Ambatovy processing plant then we sincerely hope that the Ambatovy management, and all the investors in the project take immediate action to address this situation. To date we have unfortunately seen no real attempt to address the situation in any significant way therefore allowing the incursion area to expand and the potential threat to biodiversity in Madagascar increase. Unfortunately, we are running out of funding quickly to support this effort. To date, the feasibility study and current trials have been funded almost exclusively by the conservation community and our options for securing further funding to support eradication are almost at an end.

The Alliance is now working with partners to try and secure the necessary funding to continue the ongoing efforts. “Considering the broad range of biological and economic negative impacts that are expected from this toxic toad, future generations will be furious, should we not make an eradication effort now, while there is still a chance of success,” said Chris Raxworthy, herpetologist and co-author. “We do not want to look back 20 years from now and wonder what Madagascar would be like if we had addressed this issue properly.”