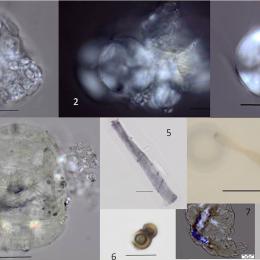 CENIEH participates in a study published in The Science of Nature which reveals the plant-based diet of Europe’s oldest hominin based on the analysis of dental calculus obtained at AtapuercaWed, 11/01/2017

The analysis of dental calculus obtained from the teeth of the mandible of an individual found at the Sima del Elefante site in Atapuerca (Burgos), dating back more than 1.2 million years, featured in a study on plant-based diet recently published in The Science of Nature journal, in which researchers from the National Research Centre for Human Evolution (CENIEH) Ruth Blasco and José Maria Bermúdez de Castro were involved.

The study, led by Karen Hardy from the Autonomous University of Barcelona-ICREA, revealed the remains of certain grasses and conifer pollen grains entrapped in dental calculus (tartar) found in the aforementioned mandible, named ATE9-1, suggesting an important role of plants in the diet of Europe’s first human populations.

As Ruth Blasco explains, two samples of 0.5 and 0.8 µg were extracted and analysed via microscopy, chemical spectrometry and chromatography in order to identify the plant micro-remains and other microorganisms contained in the plaque. Food remains identified in ATE9-1 not only pointed to a plant-based component in the diet of these hominids, but also suggested that the environment 1.2 million years ago was warmer than it is now, and allowed for the growth of rainforests and major prairies.

‘We should point out that none of the micro-remains seem to have been thermally processed, which is consistent with evidence about the absence of fire in Eurasia prior to 780,000 years ago’, adds Ruth Blasco.

In addition to the remains of grasses and pollen, microscopic fragments of wood were also found, which could correspond to the use of toothpicks to remove food remains lodged in interdental spaces. In fact, the ATE9-1 mandible has a worn-down groove in one of its premolars that could relate to these habits, according to José María Bermúdez de Castro.

‘Dental hygiene was virtually non-existent in very early prehistory, and fortunately for the researchers there were some specific components of the diet trapped in hardened build-ups of bacterial plaque, acting as authentic time capsules and allowing us to obtain information about the diet of the individuals in question’, says Ruth Blasco.