Looking for a shortcut for personalized cancer treatment In evidenza 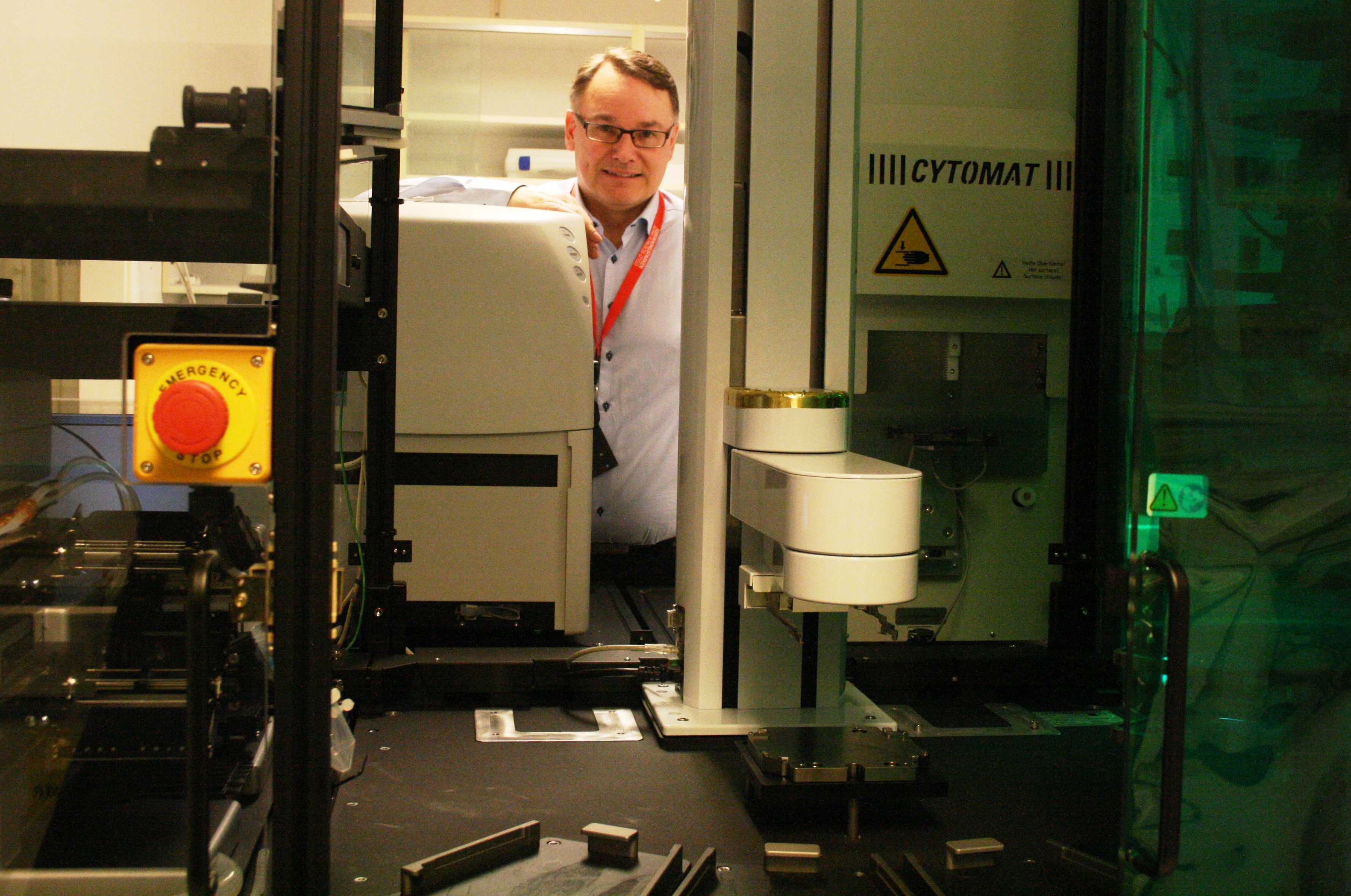 Professor Kjetil Taskén is the head of Centre for Molecular Medicine Norway. He is standing next to a robot that can check different cancer drugs on tissue samles from patients. Photo: Bjarne Roesjoe/UiO

The aim is to identify precisely the one drug, or the correct combination of drugs, that are most effective against the specific tumor present in each patient. Professor hopes that new tools will come into use in the next five years. Modern cancer therapy is like searching two hay stacks simultaneously: for the one, special treatment amongst many – to treat one, special tumor out of many.

There are hundreds of different drugs against cancer, yet every cancer tumor is, in principle, unique. The various cancer forms, such as breast and colon cancer, are not one disease, as doctors used to think many years ago, but are in fact many different diseases. The logical solution to this diversity is to adjust the cancer treatment of each patient individually. This is the topic of Professor Kjetil Taskén’s lecture at the Oslo Life Science Conference on 16 February. The aim is to identify precisely the one drug, or the correct combination of drugs, that are most effective against the specific tumor present in each patient.

Looking for the shortcut

Over the past few years, researchers have made a great effort by sequencing the whole genome of many different malignant tumors to determine which mutations have caused the tumor, and to understand which mechanisms at a molecular level are responsible for the development of cancer. This can therefore also indirectly make it possible to determine which drugs can kill the tumor. However, Taskén is dreaming of developing shortcuts that will make it possible to reach the goal of  targeted and effective cancer therapy, with fewer side effects, more rapidly.

“Over the last few years, there has been a growing understanding that all tumors are unique, and that the molecular cause of cancer differs from patient to patient; even if the reason often includes changes in growth regulation and cell division control. In addition, each tumor usually contains many other mutations that may not be related to the disease mechanisms. This is partly because the tumor cells have defects in their DNA repair machinery. As this function is not working properly, they therefore accumulate an ever-growing number of mutations,” he explains to Titan.uio.no.

In addition to the fact that each tumor can contain a wide variety of DNA mutations there can also be variations between the primary tumor and the metastases. Unique tumors can have common features “Consequently, we are talking about one, or even several, diseases in each patient but, at the same time, it’s not like these forms of cancer lack similarities. Rather, many types of cancer can have at least partially overlapping molecular causes, which means we can group them”, Taskén explains. “Whole genome sequencing of cancer tumors shows that they can contain anything between tens to thousands of mutations each. Of these, maybe 50 to 100 mutations are likely to cause disease in each patient,” he says. He continues, “only a few of these are responsible for cancer development in the patient; the others can be characterized as passenger mutations or “noise”. It’s difficult to trace the mutations that are dangerous, and to actually pinpoint the actionable targets to which treatment can be directed, but maybe that isn’t necessary?

Consequently, Kjetil Taskén and his colleagues at the Centre for Molecular Medicine Norway (NCMM), organized under the Medical Faculty and part of the University of Oslo’s interdisciplinary focus on Life Science, have started a project that utilizes UiO’s and NCMM’s national infrastructure for Chemical Biology screening. This infrastructure is set up to search for small molecules that can affect biological target molecules in other areas (research tools, drug development). However, it is now also currently being used to test approximately 400 cancer drugs and how they function when applied directly to patient samples from individual cancer patients (around 50 in the presently funded project).

“We don’t have to care about the “noise” that comes with the DNA sequencing. Instead we can get straight to the drug, or drugs, that affect each tumor without necessarily understanding the molecular mechanisms. We are already testing this on patients with bone marrow cancer, myeloma and leukemia, and we plan on incorporating more types of cancer as we move forward”, says Taskén.

Looking ahead to the future

If everything progresses according to schedule, Taskén hopes that new tools capable of helping physicians in their choice of therapy will come into use in the next five years. “And in ten years we might also know how large the health benefit is, and how much individualization is reasonable from a health economy perspective”. This will, however, always be complicated. Professor Taskén is hoping that in the future, it will be sufficient to test 20 to 30 drugs on tissue samples from each patient, instead of the 400 to 500 drugs – sometimes even more – which is the case today. Patients will benefit from a treatment directly targeting the specific tumor in each patient. Targeting will come with fewer side effects than some of today’s treatments.

“With personalized treatment, including molecular diagnostics and the screening techniques we are about to develop, we will be able to know in advance whether a patient will benefit from a certain therapy because we will already have carried out lab tests. That means that we will not expose the patients to ineffective therapies with unpleasant side effects, and we will not offer false expectations.

The challenge of finding the right drug for a specific tumor is large enough in itself. In addition, the researchers must deal with several other issues. “By considering each tumor as a unique disease, we are challenging both the existing diagnostic systems as well as the current methods for drug documentation. The “gold standard” has been to carry out double-blinded and placebo-controlled studies on a large group of patients to find the actual effect of a new drug. However, we cannot approach that in the same way that when we treat each patient individually”, he points out. This new approach will also challenge the way drugs are regulated by the authorities. Normally, drugs are approved for use on one or more cancer types, but in the future this might mean using drugs outside of where their effect and safety has been documented and approved.

“This is legal in Norway and is called “off label use” and is carried out at the responsibility of the attending physician. However, we might also be talking about combining several drugs, which will increase the challenge. We should be able to solve these challenges by sticking to well-defined, approved protocols, and verify everything as thoroughly as possible”, Taskén says. Personalized cancer therapy isn’t entirely new

“The concept and development actually started over 20 years ago. One of the first examples of simple individualized cancer treatment was when physicians started testing breast cancer tumors to see if they had estrogen receptors. If they were found to contain these, they could be treated with anti-estrogen drugs in addition to other treatments. If not, this showed anti-estrogen was useless. Thus, they began separating breast cancer patients into two groups for treatment. Now, we are able to divide them into many more groups.

Professor Taskén will talk more about the possibilities and difficulties with this new technique in a lecture titled “Future in personalised cancer therapy” at the Oslo Life Science Conference on 16 February. Financial support for the project comes from South-Eastern Norway Regional Health Authority and the Norwegian Cancer Society.