Spontaneous mutation resulting in loss of chlorophyll is a phenomenon seen among many plant species. In normal plant species, albino mutations that lack chlorophyll wither after using up the nutrients stored in their seeds, but albinos of semi-parasitic species can continue to grow and even produce flowers. These albino plants, lacking chlorophyll, become totally dependent on fungi for their survival. Plants that have abandoned photosynthesis and feed off the roots of mushrooms and other fungi are known as mycoheterotrophs. Most mycoheterotrophs are a long way genetically from even the closest autotrophic plants. In addition to the evolutionary adaptation that enabled their parasitic lifestyle, they have various other mutations, making it hard to pinpoint which gene group helped them to gain their parasitic abilities (see figure 1).

This study focused on the orchid species Epipactis helleborine. Although this species has developed green leaves and at first glance appears to be able to survive from photosynthesis alone, it is semi-dependent on fungi for carbon. Semi-mycoheterotrophic species such as E. helleborine occasionally undergo spontaneous mutations into albino varieties, totally losing their chlorophyll (see figure 2). The green individuals and the albino individuals have almost identical genome sequences, making them ideal candidates for genetic analysis of mycoheterotrophy (see figure 3). Because albino individuals lack chlorophyll, they are thought to depend more on their parasitic abilities than green individuals. This study investigated the possibility that the genes expressing more in albino varieties are related to mycoheterotrophy (parasitism of fungi). The research team focused on these highly-expressing gene groups. 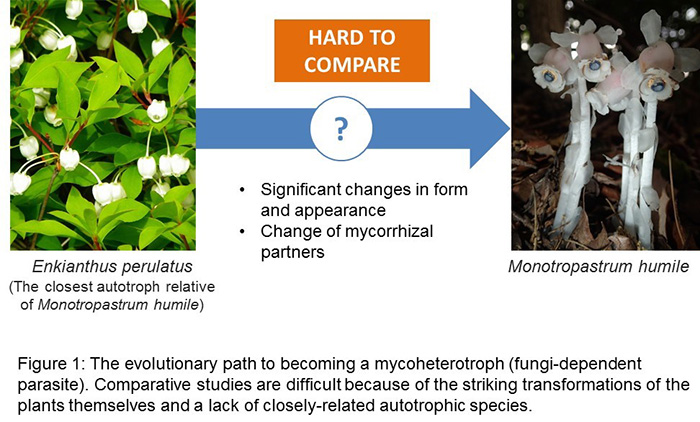 Species which have lost the ability to photosynthesize and take their nutrients from fungi. Approximately 50 of these species have been reported in Japan, including families such as Ericaceae, Polygalaceae, Gentianaceae, Burmanniaceae, Corsiaceae, Thismiaceae, Orchidaceae, Petrosaviaceae and Triuridaceae.