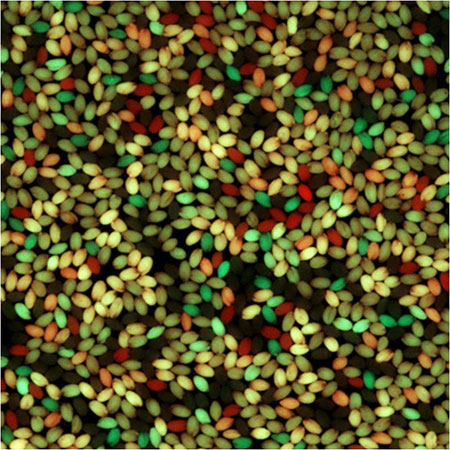 Photograph of Arabidopsis seed that are designed to inherit different fluorescent colour combinations, depending on recombination.
Researchers have discovered a key gene that influences genetic recombination during sexual reproduction in wild plant populations. Adding extra copies of this gene resulted in a massive boost to recombination and diversity in plant offspring. This finding could enable plant breeders to unlock crop variation, improve harvests and help ensure future food security. Plant geneticists at the University of Cambridge have found that different wild varieties of thale cress (Arabidopsis) show different levels of recombination – the process by which genes come together in new configurations during reproduction. Recombination has a major effect on species evolution by contributing to variation between siblings and within populations.
The group’s findings, published today in the journal Genes and Development, identify the HEI10 gene as controlling plant recombination. Unexpectedly the authors found that adding extra copies of the HEI10 gene greatly stimulated recombination and levels of diversity in offspring.
These findings may find application when new traits need to be introduced into elite crop varieties. For example, when bringing novel disease resistance genes from wild relatives into farmed varieties of crop plants.
A major problem in many crop species, including wheat and maize, is that recombination events are limited both in number and their distribution along chromosomes, which can severely limit crop improvement. As HEI10 is conserved in crop species this gene presents an attractive target to increase recombination levels - something the laboratory are now actively pursuing. “This was really unexpected and is the biggest effect on recombination we have found since beginning our research in Cambridge”, said Dr Henderson, adding, “We are very excited that a discovery from our basic research program might provide a key to unlock plant diversity and accelerate crop breeding.”. This work was performed by a collaborating international team of scientists from the University of Cambridge (UK), Cold Spring Harbor Laboratory (USA), the University of Birmingham (UK) and Adam Mickiewicz University (Poland).
Vota questo articolo
(0 Voti)