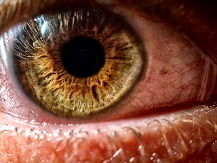 Whether it involves stopping at a traffic light or diving into freezing water to save someone from drowning: many of our everyday problems require snap decisions in the face of uncertainty. When making decisions, it has been suggested that neurochemicals rapidly flood the brain and signal how uncertain somebody is about a choice. Researchers from the University of Amsterdam (UvA) and the University Medical Centre Hamburg-Eppendorf have now found evidence of such signalling using measurements of human pupil size. Their results are published in the latest edition of Nature Communications.

Pupil size can vary for various reasons, the most common being a change in light levels. It is also known that pupils dilate whenever a person is aroused or exerts mental effort. The effect of cognitive processing on pupil dilation is thought to be triggered by the large-scale release of modulatory neurotransmitters – chemical messengers that influence communication between neurons. These neurotransmitters, like serotonin, dopamine and noradrenaline, are also believed to be involved in situations where decisions are taken under uncertainty, a phenomenon known as ‘decision uncertainty’. For their study, neuroscientist Anne Urai and her colleagues tested if uncertainty signals could indeed drive rapid changes in pupil size and whether these might predict a subsequent change in choice behaviour. The researchers used an infrared camera to measure pupil diameter in 27 participants, who sat in a dark room in front of a computer screen. The participants were then given a task in which they had to make quick decisions about moving images shown on the screen, varying in difficulty. After each answer, the participants waited up to three seconds to hear a tone indicating if their choice was correct.

The researchers found that pupil dilation is largest when a person is most uncertain about the accuracy of their decision, and still awaiting feedback. ‘By using a mathematical model of decision uncertainty, we can start to connect our results to previous findings which have shown uncertainty signalling in specific neurons in the brain of rats and monkeys’ says Urai, who forms part of the UvA’s Brain and Cognition Group. The researchers also discovered that participants generally tended to repeat their previous choices, but that this effect was reduced after large pupil responses. Urai: “Our choices are strongly influenced by our earlier decisions and the state in which they were made. Here, we found that pupil dilation specifically predicts a reduction in choice repetition. These findings form the starting point for further research into the neural basis of these choice biases.” The researchers believe these results could hold implications for our understanding of how the brain copes with everyday decision-making in the face of uncertainty. Urai: “We constantly make decisions about the world around us. These results show that the brain is able to monitor the uncertainty about each choice we make, and use this information to change future choice behaviour.” Urai hopes that the insight provided by these findings might in the future be of value in situations requiring accurate decision-making. “By studying decision-making in the lab, we can begin to understand more about real-world, uncertain decision-making in situations where it matters. We may one day be able to detect uncertain choices and reduce their potentially disastrous consequences.”

Twitter
Tweet
Altro in questa categoria: « New technique removes the cause of allergic asthma: Antibodies are suctioned off False Blister Beetles and the Expansion of Gymnosperm-Insect Pollination Modes before Angiosperm Dominance »