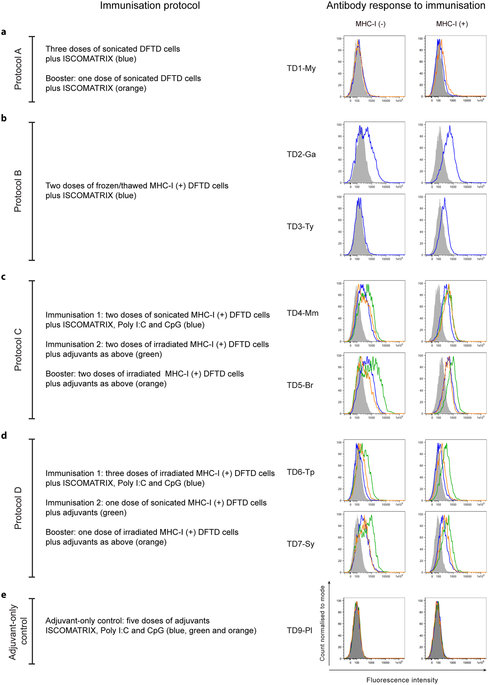 Devil facial tumour disease (DFTD) is a transmissible cancer devastating the Tasmanian devil (Sarcophilus harrisii) population. The cancer cell is the ‘infectious’ agent transmitted as an allograft by biting. Animals usually die within a few months with no evidence of antibody or immune cell responses against the DFTD allograft. This lack of anti-tumour immunity is attributed to an absence of cell surface major histocompatibility complex (MHC)-I molecule expression. While the endangerment of the devil population precludes experimentation on large experimental groups, those examined in our study indicated that immunisation and immunotherapy with DFTD cells expressing surface MHC-I corresponded with effective anti-tumour responses. Tumour engraftment did not occur in one of the five immunised Tasmanian devils, and regression followed therapy of experimentally induced DFTD tumours in three Tasmanian devils. Regression correlated with immune cell infiltration and antibody responses against DFTD cells. These data support the concept that immunisation of devils with DFTD cancer cells can successfully induce humoral responses against DFTD and trigger immune-mediated regression of established tumours. Our findings support the feasibility of a protective DFTD vaccine and ultimately the preservation of the species.

Devil facial tumour disease (DFTD) is a transmissible Schwann cell cancer1 that has decimated the Tasmanian devil (Sarcophilus harrisii) population2. The tumour is identified by its morphology and expression of the myelin-associated protein, periaxin3. Since its recognition in the far northeast of Tasmania in 1996, the disease has spread over most of the devils’ natural range. It has been estimated that more than 80% of the devil population has been killed by DFTD2. Conservation efforts are in place to protect this species, including the establishment of an insurance population. The objective is to reintroduce a robust and genetically diverse population into the wild. This can only be achieved if these devils are protected from DFTD, hence the urgent need for a vaccine.

In DFTD, the cancer cell is the ‘infectious’ agent that is transmitted as an allograft by biting2. Tasmanian devils efficiently reject allogeneic skin grafts4 and are capable of producing both cytotoxic and antibody responses against xenogeneic cancer cells5. We have also shown that activation of devil mononuclear cells with mitogens and cytokines can induce cytotoxic responses against DFTD cells in vitro6. Recently, immune responses against DFTD cells were also detected in a small number of animals in the wild7. However, most devils with DFTD do not appear to produce an immune response against the allogeneic cancer cells6,8,9. The recognition of allografts and malignant cells by the adaptive immune system depends on the interaction of host T cells with molecules of the major histocompatibility complex class I (MHC-I) expressed on the surface of nucleated cells. As DFTD cancer cells do not express MHC-I, this is likely to be a key mechanism by which tumour cells escape immune detection in devils10. Exposure of DFTD cells with IFN-γ can restore MHC-I expression10, potentially leading to allo-recognition and forming the basis of a vaccine.

In this study we sought to establish whether induction of MHC-I expression on DFTD cells as components of immunisations and immunotherapy would correspond with anti-DFTD tumour responses. To further boost immune recognition, the immunisations with IFN-γ treated DFTD cells were incorporated with combinations of ISCOMATRIX™, Poly I:C and CpG. These adjuvants promote innate, humoral and cell mediated anti-tumour immunity11. This paper illustrates the potential for vaccination to induce humoral responses and, with additional immunotherapy, trigger DFTD immune-mediated regression in vivo.

The aim of the current study was to explore immunisation protocols to enhance protective responses against DFTD. These included immunisation with DFTD cells expressing MHC-I to increase their antigenicity, in combination with ISCOMATRIX™, Poly I:C and CpG, adjuvants that enhance both innate and adaptive immune responses. As access to Tasmanian devils for research purposes is limited, we were restricted to the use of nine healthy devils, some of which had reached an advanced age. These devils were used over a five-year period. In an endeavour to improve the immune response, four immunisation protocols were tested sequentially. Seven devils were immunised with a variety of cell preparations and adjuvants to determine if they could be protected against the development of DFTD following challenge with live DFTD cells. One devil was used as an adjuvant-alone control and one devil as a non-immunised control. Devils were monitored for adverse reactions to the immunisations and none were identified. In the absence of a reliable cytotoxicity assay we used DFTD-specific IgG antibody levels in devil serum to evaluate the immune responses after the immunisations in each protocol. As devils were immunised with either MHC-I+ or MHC-I− DFTD cells, antibody reactivity was evaluated against cytokine treated (MHC-I+) and untreated (MHC-I−) DFTD cells. As IgG production requires T cell help, this also provided an indicator of T cell involvement. Six of the immunised devils and the non-immunised control devil were later challenged with live DFTD cells. If tumours developed, immunotherapy was commenced and tumour rejection and anti-tumour antibody responses were measured. Tumour biopsies were taken before and after immunotherapy, and evaluated for immune cell infiltration by immunohistochemistry. An outline of the immunisations, challenges and tumour development is presented in Supplementary Table S1.

A comparison of the four protocols can be seen in Figs 1–4. The responses to immunisation are shown in Fig. 1 and highlight that immunisation with MHC-I+ DFTD cells consistently produced antibody responses. Figure 2 shows the histology of the engrafted DFTD tumours, which occurred in six of the seven devils challenged with live tumour cells. Immunohistochemistry did not reveal evidence of immune cell infiltration into the tumours. Figure 3 outlines the growth of the engrafted tumours and their response to immunotherapy. Immunotherapy with live MHC-I+ DFTD cells was associated with tumour regression in three devils and the regression correlated with antibody responses against DFTD cells. The histology in Fig. 4 supports the immune-mediated regression of the tumours as indicated by the large numbers of MHC-II and CD3 positive cells infiltrating the tumour.