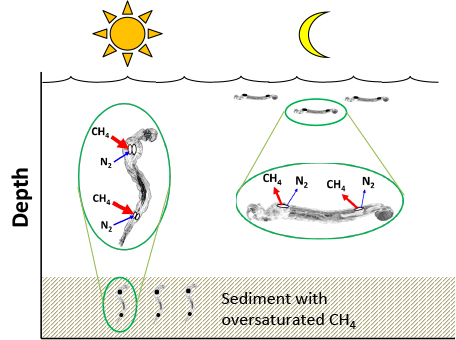 Greenhouse gases: First it was cows -- now it's larvae!

During the day, the Chaoborus spp hide in the sediment where dissolved methane is transferred into their gas sacs. Using the buoyancy from the methane, they float to the lake surface at night to feed on zooplankton. At the surface, the methane in the gas sacs is dissolved back into the water.  Chaoborus spp is a small fly species that is found all over the world (except in Antarctica). The insect spends one to two years of its life cycle under water in a larval state, in lakes no deeper than 70 metres. Larvae spend the day in lakebed sediment and rise to the surface at night to feed. They are equipped with air sacs that they can adjust to alter their depth in the water so as to migrate upwards and downwards.

Scientists at the University of Geneva (UNIGE), Switzerland and collaborators have discovered that Chaoborus spp also uses the methane it finds in lake beds to help it move around. The species releases methane into the surface water, increasing the likelihood that the gas will enter the atmosphere. The research, which has just been published in Scientific Reports, demonstrates the negative role played by the larvae not just in global warming but also in disturbing the sedimentary layers at the bottom of lakes.

The life cycle of the small fly Chaoborus spp has been well known for almost a century. Scientists discovered that during the larval stage (the longest phase of its cycle), the larva is armed with small air sacs—vesicles—that it uses to navigate between the lake surface, where it feeds, and the sediment at the bottom of the lake, where it protects itself from predators and the heat of the day. Chaoborus spp can adjust its position in the water by inflating these air pockets to rise to the surface or, conversely, compress them to descend again. However, at a depth of 70 metres, it is impossible for the larva to inflate its vesicles due to the water pressure exerted on them. The team researched what happens in these conditions in a study led by Professor Daniel McGinnis..

"Methane is a gas that is not very soluble in water. We know that it is present in very large quantities in anoxic sediments (depleted of oxygen), and that it exceeds the solubility capacity in water and forms small bubbles. Therefore, we hypothesised that the Chaoborus spp larvae absorb excess gas bubbles in order to inflate their vesicles, in spite of the water pressure, and are thus able to travel back to the surface," explains Professor McGinnis. The scientists did, indeed, find that methane, since it slides naturally into the larva's gas sacs, enabling it to re-inflate them so the larva can reach the surface. Thanks to this ingenious inflatable "lift" system, Chaoborus spp saves up to 80 percent of the energy it would spend if it had to swim to the surface. Consequently, the larvae require less food and can expand their habitat.

The scientists subsequently explored what larvae do with the methane they store. "First, we put the larvae in an flask containing water that was rich in methane; then we moved them into methane-poor water," says McGinnis. "After taking measurements, we observed that the methane level increased in proportion to the amount of larvae present. In other words, the larvae release this gas into the water once they reach the surface." Fresh water is responsible for 20 percent of natural methane emissions, and methane absorbs 28 times more heat than CO2; it has a significant impact, in short, on the greenhouse gas effect. Under normal conditions, methane is isolated and stored in lake sediments. However, the Chaoborus spp larvae let the gas out of this zone and increase its chances of reaching the atmosphere. They are therefore partly responsible for global warming.

What can be done about the situation? "The Chaoborus spp larvae, whose density ranges from 2,000 to 130,000 individuals per square metre, are only found when water is of poor quality, i.e. when it contains too many nutrients," adds Professor McGinnis. "So this means improving water quality and the way we monitor agriculture and treat waste water. The larvae also allow some pollutants to reach the surface since they bring particles of sediment up with them.

Paleolimnology is the study of water through the ages. The discipline is based on analysing the various layers of sediment found in bodies of water, with the striae enabling scientists to investigate the different states of water over the centuries. Yet, this is only possible if sediment has been allowed to settle and solidify in lakebeds without being disturbed. But, once again, the Chaoborus spp larvae disrupt these analyses since they stir up the layers of sediment when hiding away during the daytime. Consequently, scientists no longer have access to reliable striae for analysis. Professor McGinnis concludes, "In summary, although it is fascinating to study the insect, the presence of Chaoborus spp is always a bad sign for the health of an ecosystem. At the same time, it gives us one more reason to safeguard good water quality in our lakes."