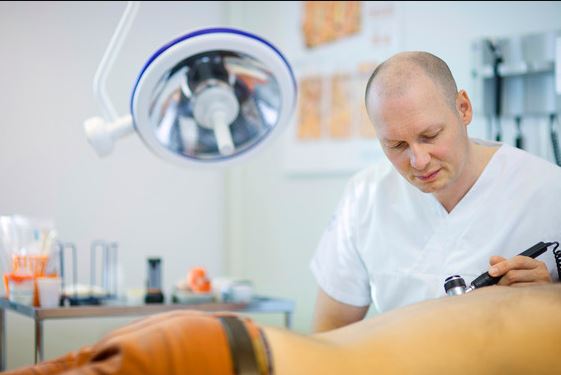 Marcus Schmitt-Egenolf is a researcher at the Department of Public Health and Clinical Medicine at Umeå University and senior author of the study.

The fact that men are overrepresented in psoriasis registers and consume more psoriasis care have long led researchers to believe that the common skin disease disproportionally affects men. A unique study with 5,438 Swedish psoriasis patients now reveals that women have a statistically significant lower incidence of severe psoriasis compared to men. The study, conducted by researchers at Umeå University and Karolinska Institutet, is published in the American Journal of Clinical Dermatology. “Our results tell us that the well-established gender differences in the utilization of psoriasis care can at least partially be explained by a higher prevalence of more severe disease in men,” says Marcus Schmitt-Egenolf, who is researcher at the Department of Public Health and Clinical Medicine at Umeå University and senior author of the study.

The study of gender differences in severe psoriasis cases was based on the Swedish quality register for systemic treatment of psoriasis, PsoReg, which contains detailed disease measurement data on all patients measured with the standard method Psoriasis Area Severity Index (PASI). In the analysis, the researchers found that women had significantly (p<0.001) lower median PASI values than men (5.4 for women versus 7.3 for men). The findings of more severe psoriasis in men were consistent across all ages and in all areas of the body except for the head. “These findings should motivate a gender perspective in the management of severe psoriasis and its comorbidities, such as cardiovascular and metabolic disease,” says Marcus Schmitt-Egenolf.

The researchers point out that the study found no differences between women and men in the use of medications before enrolment in the PsoReg register that may explain the observed sex difference. Instead, the researchers argue, the finding that women have less severe psoriasis can explain the well-known male dominance in systemic treatment of psoriasis. “For over 70 years, psoriasis researchers have speculated that women have less severe psoriasis compared to men. Our study is the first to investigate sex differences in psoriasis severity using the golden standard of severity measurement, the PASI score. Furthermore, we have also looked more in-depth at distinct elements of the PASI score. The results allow us to verify this thesis in a nationwide population. However, further research is needed to substantiate our findings in different populations,” says Marcus Schmitt-Egenolf. Psoriasis is a common autoimmune skin disease affecting about three percent of the Swedish population. Moderate-to-severe psoriasis is associated with a dose-dependent risk for cardiovascular and metabolic morbidity. In contrast to the situation in severe psoriasis, most autoimmune diseases, such as systemic lupus erythematosus (SLE), multiple sclerosis (MS) and rheumatoid arthritis (RA), are more prevalent in women than in men.

Twitter
Tweet
Altro in questa categoria: « CNRS and the Louvre-Lens museum study perception of art with Ikonikat Upper part of Earth’s magnetic field reveals details of a dramatic past »