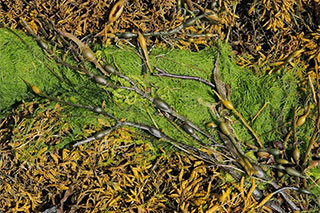 A research project conducted at the University of Cologne’s Zoological Institute reveals important findings on the interaction between nutrient availability and the diversity of consumer species in freshwater environments. A better understanding of this interaction will contribute to developing possibilities to maintain biodiversity in all kinds of ecosystems. In the past decades, we have seen a dramatic decline in biodiversity around the world. Every day, species are irrecoverably lost on an unprecedented scale. This also has an impact on the stability and productivity of ecosystems. Hence it is indispensable to understand the mechanisms that impact biodiversity, particularly in the case of primary producers such as algae and plants that form the basis of nearly all natural food webs and ecosystems.

Sophie Gröndahl is a doctoral researcher in the working group of Dr Patrick Fink at the University of Cologne’s Zoological Institute. In an experimental study on algae from freshwater biofilms, she was able to show that both the availability of nutrients and the diversity of consumer species (herbivores) have a significant positive impact on the diversity of photosynthetic organisms. This means that a high degree of biodiversity on one level of the food chain has a positive impact on biodiversity on the level directly below it.

Fink and Gröndahl moreover found out that nutrient availability and the diversity of consumer species do not impact the biodiversity of the algae population separately, but rather interact and mutually influence each other. For example, if nutrient pollution is high – which is often the case in the overfertilization of freshwater caused by humans – the positive effect of the greater diversity of herbivorous consumers on the biodiversity of the algae population is lost. In an overfertilized system, it appears that one of the most important mechanisms sustaining producer diversity no longer functions correctly, which has far-reaching ramifications for our understanding of how to maintain biodiversity – not only in freshwater environments, but in all kinds of ecosystems. The study ‘Consumer species richness and nutrients interact in determining producer diversity’ was published in the current issue of ‘Scientific Reports’. It is part of the research project ‘Interactions between consumer and resource diversity under changing environmental conditions’ at the University of Cologne, which is funded by the German Research Foundation (DFG).