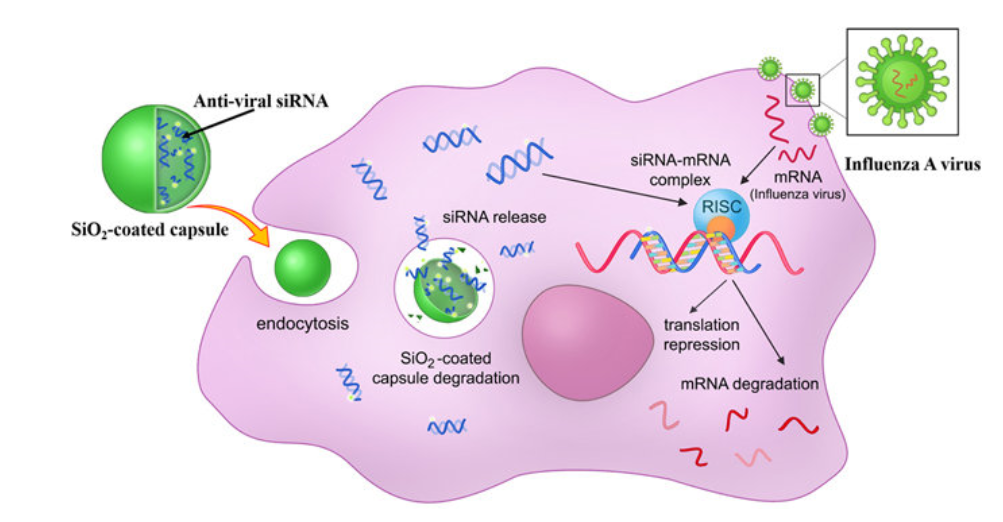 The schematic illustration of the intracellular delivery of antiviral siRNA against influenza A virus using SiO2-coated hybrid capsules.

Scientists from Tomsk Polytechnic University together with their colleagues from St. Petersburg and London have elaborated a new approach to deliver anti-viral RNAi to target cells against H1N1 influenza virus infection. Drug encapsulating via a combination of layer-by-layer technique and sol-gel chemistry allows beating swine flu at the gene level. The first test showed an 80% drop in virus protein synthesis. A research was conducted by scientists from the Novel Dosage Laboratory, RASA Center at TPU, Pavlov First Saint Petersburg State Medical University, Research Institute of Influenza of Ministry of Healthcare of the Russian Federation and Queen Mary University of London School of Engineering and Materials Science. Scientists from Gorbacheva Research Institute of Pediatric Hematology and Transplantation also took an active part in the research.

A new method to fight influenza A (H1N1) virus is focused on training our body to produce interferons (proteins that make our body immune to the virus) faster. The obtained results can be applied to a new delivery system of antiviral drugs to fight with various influenza types. The article Hybrid inorganic-organic capsules for efficient intracellular delivery of novel siRNAs against influenza A (H1N1) virus infection was published in Scientific Reports.

TPU scientists suggest activating cell immune system with hybrid spherical microcontainers that contain antiviral RNAs (Ribonucleic Acids). “We used short interfering RNA, which interact with matrix RNA (mRNA) of the influenza virus. This leads to degradation of “viral” RNA, preventing its translation on ribosomes into a protein encoded by it, thereby reducing the viral gene expression,” says one of the main co-authors of the research Alexander Timin, a JRF of the Novel Dosage Laboratory at Tomsk RASA Center. The delivery of microcontainers with short interfering RNA is ensured within the human body through respiratory tract - nasal sinuses. In the sinus cavity the microcontainers degrade and release RNA into cells, which results in the transfection and therefore enhances immunity against influenza virus. “For the first time we have developed an approach of efficient matrix RNA delivery through encapsulation into new hybrid microcarriers obtained by integration of LbL technique and sol-gel method. Three types of siRNA against influenza A (H1N1) virus infection were encapsulated in hybrid carriers. Such hybrid carriers have several advantages: low toxicity, efficient intracellular delivery and protection of siRNA against premature degradation prior to reaching the target cells. The results obtained may be used for new antiviral delivery that will further contribute to efficient fight with influenza virus,” the article reports.

According to scientists, the first laboratory test showed that such interaction results in an 80% drop of virus proteins.

Spliceosome: how the right informat...