Boom times for fish populations in Wisconsin lakes In evidenza 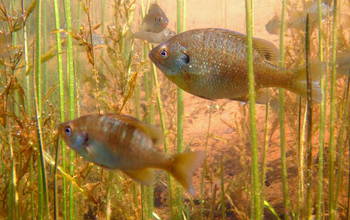 We're all familiar with the idea of extreme events. Meteorologists keep us up to date on hurricanes, floods and high temperatures. Economists watch the stock market for signs of crashes or rallies. Researchers spend a lot of time trying to better predict these events, yet are often surprised by the outcomes. According to a new study in the journal Limnology & Oceanography Letters, when it comes to nature's extremes, nothing seems to beat what happens underwater. Scientists at the National Science Foundation (NSF) North Temperate Lakes Long-Term Ecological Research (LTER) site -- one of 28 NSF LTER sites -- are routinely measuring everything from water temperature to nutrient concentrations to fish populations in Wisconsin lakes.

Taking advantage of several decades' worth of data, Ryan Batt, the paper's lead author, and a team of researchers compared data on various physical, chemical and biological variables -- 595 variables in total. They found that as the lakes' temperatures rose and their nutrient concentrations increased, so did the number of organisms living there. The findings challenge preconceptions about what a "normal" distribution of averages and extremes looks like for the plants and animals in an ecosystem. "Think of human height," says Batt, who is now at Rutgers University but conducted the study while at the University of Wisconsin-Madison's Center for Limnology. "If you saw someone walking around who was 14 feet tall, that would be insane. Even a single foot in height makes a huge difference in terms of being an outlier for what we would consider 'normal.'" But, in the case of the populations of plants, fish and plankton living in lakes, that kind of outlier may not be unusual, according to Batt. For example, in the three decades researchers have been tracking fish populations in Wisconsin's Lake Mendota, an average catch rate for bluegill, a popular and tasty fish, has been about five per hour of fishing. But in 1983 and 2004, that catch rate was more than 30 per hour.

Research on nearby Lake Monona revealed similar extremes in the bluegill population. From 1995 to the early 2000s, bluegill numbers fluctuated between about 200,000 and 300,000. Then, in 2002, that estimate spiked to 500,000, nearly doubling the previous high mark. Three years after that, it topped out at around 800,000. "We tend to look at extreme events in the environment in a negative way," Batt says. "Like there's a heat wave and a bunch of fish die. Or there's a cold snap and a bunch of fish die. People usually think of the environment as having extremes that are lethal."

Steve Carpenter, director of the UW-Madison Center for Limnology and a co-author of the study, at one time thought that biology would produce fewer extremes. But through long-term research, he learned otherwise. "There are new records being set all the time," he says. "For physical and chemical variables, you may have to wait a long time to see a new record, then the new record isn't all that shocking. But often you don't have to wait all that long for a biological variable to set a record, and that new record can be, 'Wow, that's more yellow perch than we ever saw before. By a lot.'"

Data collected over long periods of time help researchers identify extremes that are less obvious, says NSF LTER program director John Schade. "Extreme increases in populations of organisms are hard to predict, and can have significant consequences for human well-being and for the ecosystem services we all depend on," Schade says. "This work demonstrates just how fast, big, and common these increases can be. Without long-term research, we could not understand the causes and consequences of these extreme events." In their paper, the authors propose one mechanism driving the increase in fish populations. Organisms may be primed to take advantage of good conditions. Years that saw unprecedented booms in fish or algae populations could signify a corresponding bump in environmental conditions like water temperatures and the availability of nutrients. Since human activity affects climate change, habitat loss, nutrient pollution and other environmental variables, says Carpenter, society should prepare, seeking to better understand what those changes mean for different ecosystems.

With the variability this study uncovered, Carpenter says, it's challenging to determine what "normal" population levels might be. "We need to be prepared to see new records," he says. It's not enough to just expect the unexpected, says Carpenter. "We also need to be ready for the unprecedented."

Twitter
Tweet
Altro in questa categoria: « Biomaterials for the regeneration of bone and cartilage tissues from apple waste Risky Alcohol Consumption Can Increase at Time of Retirement »