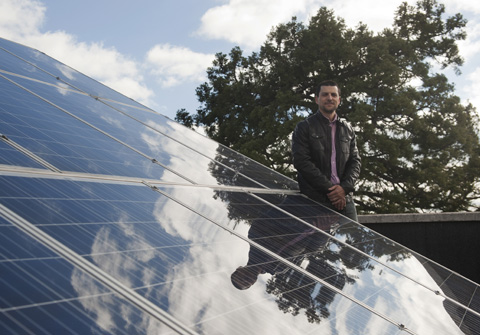 After having developed various algorithms and control systems and having applied them in a whole range of fields, such as robotics, control of motors in electric machines, and in wind generators, the UPV/EHU’s Advanced Control Group has proven that one of the methods, a sliding mode controller, offers good results in the control of photovoltaic generators, too. “It’s a kind of innovative, smart control that is robust in various environmental conditions. What is more, we have conducted the tests using commercial photovoltaic panels, so it could be applied in the sector directly,” explained Oscar Barambones, head of this group’s research area.

The main advantage offered by this new control system over the control systems that are fitted to current generators is that “it allows the generators to work at their maximum power point all the time, at their optimum working point and thus renders them more efficient. Current control systems tend to use algorithms of a perturbation/observation type, which cause the working point of the photovoltaic generator to be continually oscillating, so it does not work exactly at the maximum working point but is oscillating around this point, which causes its efficiency to diminish,” remarked Barambones. Sliding control is “appropriate”, according to Barambones, for systems that have uncertainties such as photovoltaic generators: “the irradiance is not always the same, clouds may pass by, etc. or the load connected to the generator may also change. Owing to its characteristics, this type of control is capable of superimposing these uncertainties and adapting the generator’s working point to the conditions of each moment so that it always works at its optimum point”.

The paradox of renewables

Despite the fact that the tests were carried out using commercial photovoltaic panels and could be implemented and used on an industrial scale without any problem, Barambones admits that the system has certain features that “could slow down its transfer to the market”. One thing is the cost, which is higher than that of the current controllers given that they have a “greater computational cost, in other words, they cannot be implemented using low-cost processors, and that is why processors with a greater calculating capacity are needed. So in many cases even the processor would need to be substituted. What would remain to be done is to calculate the cost difference involved and the percentage of efficiency that would increase when these new control modes are implemented”. Barambones explains the paradox that exists with renewable energies in this respect: “One may not be interested in having a more efficient photovoltaic generator if, for example, the cost of substituting the control mode of a photovoltaic generation system is going to be higher than adding additional panels, since the solar energy is available and costs nothing. Increasing the efficiency of a diesel generator, for example, thus enabling you to use less fuel to generate the same quantity of electrical power, is not the same as increasing the efficiency of a photovoltaic generator because what it uses is solar irradiation. You use less solar irradiation, it is true, but that is not such a critical aspect as in the case of fossil fuels”.