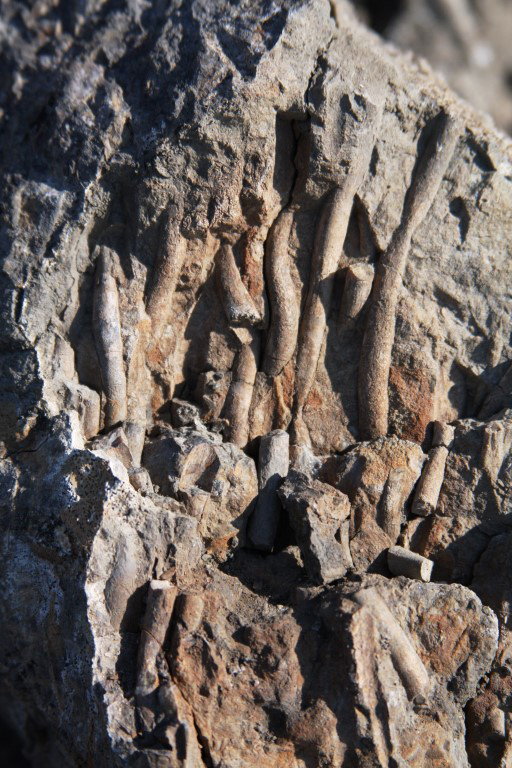 Cretaceous climate warming led to a significant methane release from the seafloor, indicating potential for similar destabilization of gas hydrates under modern global warming. A field campaign on the remote Ellef Ringnes Island, Canadian High Arctic, discovered an astounding number of methane seep mounds in Cretaceous age sediments. Seep mounds are carbonate deposits, often hosting unique fauna, which form at sites of methane leakage into the seafloor. Over 130 were found covering over 10,000 square kilometers of the Cretaceous sea floor. They occurred over a very short time interval immediately following onset of Cretaceous global warming, suggesting that the warming destabilized gas hydrates and released a large burb of methane. Given that methane has 20 times the impact of CO2 as a greenhouse gas, such a release could have accelerated global warming at that time. This discovery supports concerns of potential destabilization of modern methane hydrates.

A field campaign was run during 2009-2011 to map the geology of Ellef Ringnes Island. Around the same size as Jamaica, this is one of the most remote and difficult to access islands in the Canadian High Arctic, and as such not much was known about the geology. A remote helicopter supported field camp was established in 2009, with a peak of 30 geoscientists working from the camp in 2010 as part of the Geological Survey of Canada’s GEM Program. The island, and its neighbor Amund Ringnes Island, were named after brothers who founded Norway’s Ringnes Brewery that funded the exploration of the region conducted by Otto Sverdrup in the early 1900s

As part of this work, Krista Williscroft, Stephen Grasby, and colleagues intended to reinvestigate strange spaghetti-like rock that was noticed, but the origin not understood, during the first geologic mapping of the island in the 1970s. Years later, a geologist saw a sample of this feature sitting on his colleague’s desk and was intrigued by its spaghetti like nature. Chemical analyses revealed that this was a carbonate rock formed by the oxidation of methane, and the spaghetti texture was formed by fossil tube worms. This was shortly after the first discovery of methane cold seeps in the modern oceans and became the first recognition of such features in the geologic record. In this case, it was known to have formed during the Cretaceous, the time of the dinosaurs roamed the earth, around 110 million years ago. Sadly, these original samples were lost, and given the remoteness of the location, it was not possible to gain more, limiting any further work.

Methane cold seeps are similar to the more famous black smokers in that they form isolated ecosystems as oasis in the deep ocean, but are lower temperatures and form away from mid-ocean ridges. They forms at sites were natural methane gas leaks into seawater. Microbes oxidase this methane as a source of energy and produce carbonate deposits as a by-product. In the modern world, these sites are characterized by an unusual abundance of tube worms, bivalves (clams), molluscs, and other animals that survive on the microbial mats that grow there. In the rock record, they stand out as very unusual features that have this strange spaghetti-like appearance related to fossil tube worms and an abundance of other fossils. As they form in deep water they also stand out as resistant carbonate mounds in rock that is otherwise easily eroded shale.

In 2010 the intention was to revisit the site first discovered in the 1970s. It stood out as a small mound on the otherwise rolling landscape of arctic tundra. From this site another mound could be seen in the distance, which raised the tantalizing possibility of a second site. Some hard walking through thick mud paid off when it was reached, revealing another fossil methane seep. From there a further mound could be seen, and on and on. This lead to more than four weeks of trudging from mound to mound through muddy tundra, and the discovery of over 130 methane seep mounds in the rock record. This is now one of the most extensive sites of these features known anywhere in the world, covering more than 10,000 square kilometers.

A key feature of this discovery is recognition that all the seep mounds formed during a very narrow range of geologic time. Because they form by leakage of methane into seawater it implies that something at that time caused a large release of methane into the ocean. The timing is coincident with a period of global warming, and Williscroft and colleagues suggest that it was this warming that released methane frozen as methane hydrates in the sea floor, as a relatively sudden methane “burp.” If correct, this has important implications for modern warming of the Arctic Ocean. Similar frozen methane hydrates occur throughout the same arctic region as they did in the past, and warming of the ocean and release of this methane is of key concern as methane is 20x the impact of CO2 as a greenhouse gas. Release of methane hydrates has previously been suggested as a mechanism to drive runaway greenhouse events, as warming oceans releases trapped methane that causes further warming and releases more methane. The extensive methane seep mounds across the remote arctic island of Ellef Ringnes may be a caution from the past regarding potential impacts of modern warming of the Arctic Ocean.