Potential for Saudi Arabian coral reefs to shine In evidenza 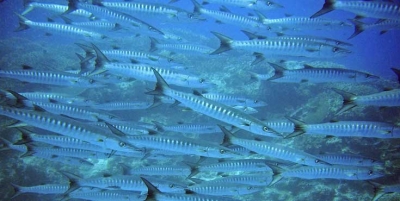 Marine surveys estimating fish population density and diversity are crucial to our understanding of how human activities impact coral reef ecosystems and to our ability to make informed management plans for sustainability. KAUST researchers recently conducted the first baseline surveys of reefs in the southern Red Sea by comparing reefs off the coast of Saudi Arabia with those of Sudan1. “A major issue is that there is no established historical record for Red Sea ecosystems,” said Dr. Darren Coker, who worked on the project with KAUST M.Sc. Alumnus Alexander Kattan and Professor Michael Berumen all of the University’s Red Sea Research Center. “This means we can only hypothesize what the natural reef environment would have looked like before human interference through fishing began.”

Berumen’s team systematically compared 14 Saudi reefs with 16 offshore reefs in Sudan. The reefs are around 200-300 Km apart and share almost identical environmental conditions in terms of sea temperature, climate and coral species. However, Saudi Arabia has a long-established history of fishing, while Sudan does not. “There is much more to the story than just the numbers of fish we see,” said Berumen. “We collected and analyzed data between and within regions to look at fish abundance, biomass and community diversity across all the reefs surveyed.” “To minimize potential bias, I conducted all the survey dives myself,” said Kattan, who trained intensively to ensure he could correctly identify fish species and accurately estimate their size underwater. “A friend helped me practice in a pool by diving with different sizes and shapes of simulated fish on popsicle sticks! Because size estimates were converted into biomass, it was vital that I was able to gauge sizes correctly.” The team found that the biomass of top predators in the Sudanese reefs was almost three times that of the Saudi reefs. The top predators were far rarer in Saudi Arabian waters, a phenomenon that the researchers attribute to fishing pressures. Furthermore, fish abundance was around 62 % higher in Sudan and biomass was 20 % higher. There was also slightly greater diversity on the Sudanese reefs. “This is the strongest evidence yet of the impact of fishing on Saudi Arabia’s reefs,” said Berumen. “While Saudi Arabia appears to have lost many larger fish, these species, including top predators, have not completely disappeared, so there is an opportunity to turn the situation around. Saudi’s reefs could be restored to the condition of the almost pristine Sudanese reefs through careful management and protection, and they could one day thrive as eco-tourism sites.”