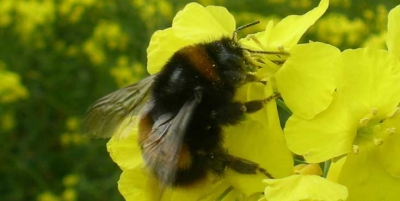 New research published in the journal Proceedings of the Royal Society B has found that wild bumblebee queens are less able to develop their ovaries when exposed to a common neonicotinoid pesticide. The research was conducted by Dr Gemma Baron , Professor Mark Brown of Royal Holloway, University of London and Professor Nigel Raine, (now based at the University of Guelph). The study investigated the impact of exposure to field-realistic levels of a neonicotinoid insecticide (thiamethoxam) on the feeding behaviour and ovary development of four species of bumblebee queen.

Lead author, Dr Baron said, “We consistently found that neonicotinoid exposure, at levels mimicking exposure that queens could experience in agricultural landscapes, resulted in reduced ovary development in queens of all four species we tested.” She continued, “Impacts of neonicotinoid exposure on feeding behaviour were species-specific, with two out of four species eating less artificial nectar when exposed to the pesticide. These impacts are likely to reduce the success of bumblebee queens in the spring, with knock-on effects for bee populations later in the year” added Baron. As the first to examine the impacts of these chemicals across multiple bumblebee species, this study is an important contribution to understanding the potential costs of using this class of insecticides. Dr Baron explained, “Previous studies have focused on a single bumblebee species and examined impacts in workers and established colonies. Bumblebee populations rely on spring queens to succeed, and by looking at the impacts of thiamethoxam on multiple species of spring queens, we have gained a step-change in our understanding”.

Thiamethoxam is currently under an EU moratorium, along with two other neonicotinoids. "The EU, and other countries, is weighing the benefits of using neonicotinoids to protect crops, against real concerns about how such pesticides can cause unintended harm to pollinators and other beneficial insects.” added Professor Raine. “This work on wild bumblebee queens adds significantly to the evidence base on which to make such important policy decisions”. Professor Brown commented that. “Our work provides a major step forward in understanding the general and species-specific impacts of neonicotinoids on wild bees. Future studies across different species are likely to demonstrate further variation in the impact of neonicotinoids, and conducting such studies needs to be a priority for scientists and governments”. This study was funded by a BBSRC-DTG studentship, and the Insect Pollinators Initiative (joint-funded by the Biotechnology and Biological Sciences Research Council, Defra, the Natural Environment Research Council (NERC), the Scottish Government and the Wellcome Trust. It is managed under the auspices of the Living with Environmental Change (LWEC) partnership.)