New theory on how Earth’s crust was created In evidenza 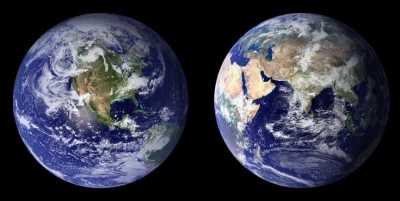 The atmosphere following that collision, however, consisted of high-temperature steam that dissolved rocks on the Earth’s immediate surface - “much like how sugar is dissolved in coffee,” Baker explains. This is where the new wrinkle comes in. “These dissolved minerals rose to the upper atmosphere and cooled off, and then these silicate materials that were dissolved at the surface would start to separate out and fall back to Earth in what we call a silicate rain.” To test this theory, Baker and co-author Kassandra Sofonio, a McGill undergraduate research assistant, spent months developing a series of laboratory experiments designed to mimic the steamy conditions on early Earth. A mixture of bulk silicate earth materials and water was melted in air at 1,550 degrees Celsius, then ground to a powder. Small amounts of the powder, along with water, were then enclosed in gold palladium capsules, placed in a pressure vessel and heated to about 727 degrees Celsius and 100 times Earth’s surface pressure to simulate conditions in the Earth's atmosphere about 1 million years after the moon-forming impact. After each experiment, samples were rapidly quenched and the material that had been dissolved in the high temperature steam analyzed.

The experiments were guided by other scientists’ previous experiments on rock-water interactions at high pressures, and by the McGill team’s own preliminary calculations, Baker notes. Even so, “we were surprised by the similarity of the dissolved silicate material produced by the experiments” to that found in the Earth’s crust. Their resulting paper, published in the journal Earth and Planetary Science Letters, posits a new theory of “aerial metasomatism” - a term coined by Sofonio to describe the process by which silica minerals condensed and fell back to earth over about a million years, producing some of the earliest rock specimens known today. “Our experiment shows the chemistry of this process,” and could provide scientists with important clues as to which exoplanets might have the capacity to harbor life Baker says. “This time in early Earth's history is still really exciting,” he adds. “A lot of people think that life started very soon after these events that we're talking about. This is setting up the stages for the Earth being ready to support life.”

Twitter
Tweet
Altro in questa categoria: « They Like You as You Are. Why Being Yourself at Interviews Will Earn You the Job Global bipolar disorder study reveals thinning of gray matter in brain regions responsible for inhibition and emotion »