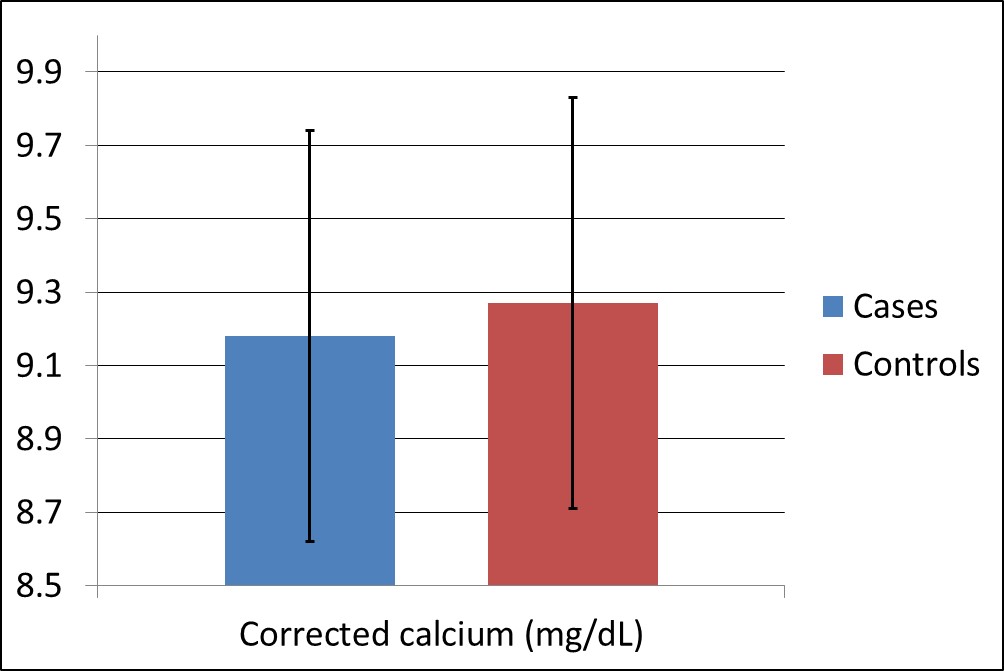 Sudden cardiac arrest (SCA) is fatal for over 90% of patients, and more than half of men and close to 70% of women who die of SCA have no clinical history of heart disease prior to this cardiac event. It is one of the leading causes of death in the United States and kills more people than any single cancer. Many patients who suffer SCA would not be considered high risk under current guidelines. These sobering facts drive the search for simple and relatively inexpensive ways to identify individuals at higher risk for SCA. In a study in Mayo Clinic Proceedings, researchers found that individuals with lower levels of calcium in the blood, which is easily monitored, are more likely to experience SCA than those with higher calcium levels.

“Our study found that serum calcium levels were lower in individuals who had a sudden cardiac arrest than in a control group. Patients with serum calcium in the lowest quartile (<8.95 mg/dL) had twice the odds of sudden cardiac arrest compared to those in the highest quartile (>9.55 mg/dL), even after controlling for multiple patient characteristics including demographics, cardiovascular risk factors and comorbidities, and medication use,” explained lead investigator Sumeet S. Chugh, MD, Pauline and Harold Price Chair in Cardiac Electrophysiology, Cedars-Sinai Heart Institute, Los Angeles, CA.

Data from 2002 until 2015 were gathered from the Oregon Sudden Unexpected Death Study (Oregon SUDS). The goal of the Oregon SUDS is to improve understanding of who is at risk for out-of-hospital sudden cardiac arrest. This study included 267 SCA cases and 445 control subjects whose serum calcium levels were measured during routine medical care. All SCA cases had had serum calcium levels measured in the 90 days prior to their cardiac arrest. The Oregon SUDS collaborates with emergency responders and hospitals in the Portland, OR metro area to identify all cases of sudden cardiac arrest. This enabled researchers to collect comprehensive patient medical history from the time prior to their cardiac arrest. Each patient’s total serum calcium was corrected by their serum albumin level to estimate a more physiologically relevant corrected calcium level. SCA cases had a significantly higher percentage of African Americans and patients with diabetes mellitus, chronic obstructive pulmonary disease, and chronic kidney disease compared to the control group. Cases were also more likely than controls to be on hemodialysis. In addition, diuretics, especially loop diuretics, were prescribed more for cases than for controls with no differences in the rate of utilization of beta blockers. “Overall, it seems that further study is required to elucidate the mechanisms underlying the adverse associations with lower calcium levels and to determine whether controlling calcium levels improves the prognosis in the general population or in high-risk patients,” commented Dr. Chugh.

First author Hirad Yarmohammadi, MD, MPH, postdoctoral fellow at Cedars-Sinai, currently training in the Cardiovascular Division, Brigham and Women’s Hospital, Boston, MA, said: “Our study showed that lower serum calcium levels, even within the normal range of values, may increase risk for sudden cardiac death. Although our findings may not be ready for routine clinical use in patients at this time, they are a step towards the goal of improving patient care by better prediction of risk.” In an accompanying editorial, Hon-Chi Lee, MD, PhD, of the Department of Cardiovascular Medicine, Mayo Clinic, Rochester, MN, noted, “This is the first report to show that low serum calcium levels measured close in time to the index event are independently associated with an increased risk of SCA in the general population.” While these results should be interpreted with caution, Dr. Lee recommends that (1) serum calcium levels should be examined and followed longitudinally more carefully, (2) low serum calcium levels may be considered a potential risk factor for SCA in the community, and (3) more research is necessary to determine whether patients in the lowest quartile of serum calcium would benefit from higher dietary calcium intake or calcium supplementation.