This ingenious approach not only binds CO2, but also improves the soil 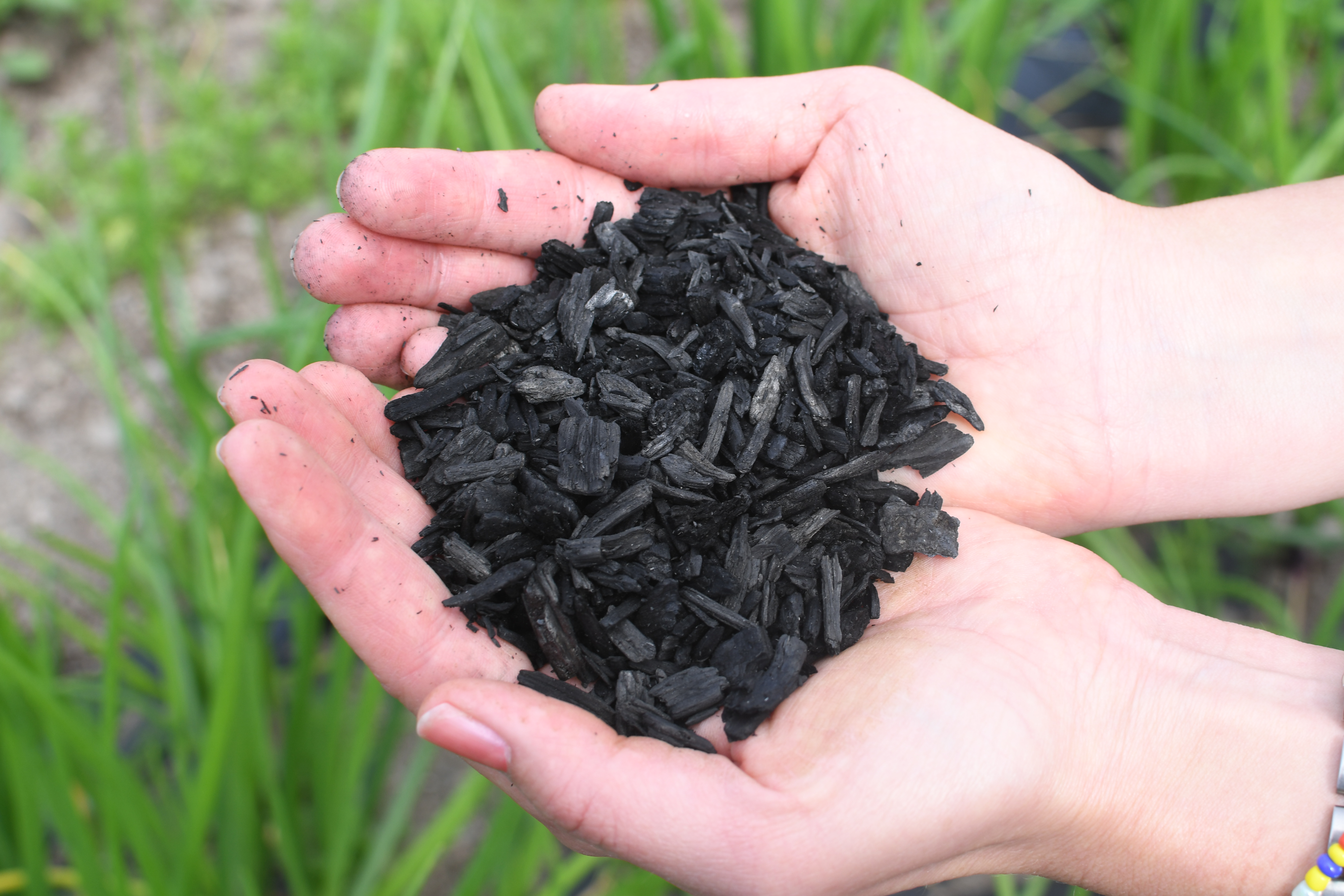 Biochar can help us address many environmental challenges. This form of CO2 capture and storage reduces the need for fertilisers and may lead to better crop yields. It can also remove heavy metals from the soil. Photo: Lisbet Jære.

If 4,000 Norwegian farms and nurseries produced biochar and mixed it with the soil, we could halve CO2 emissions from the agricultural sector. This entirely natural approach also produces more robust and healthy plants. There is a new addition among the greenhouses at the Skjærgaarden nursery – Norway’s first biochar plant.  Biochar is identical to charcoal (or barbecue coal), but can be manufactured not only from wood, but also from other kinds of organic material. The nursery is hosting the first biochar demo plant in Norway, which has been installed in collaboration with the cross-disciplinary research project CAPTURE+. “Our motivation for starting biochar production is to improve the soil”, says Kristin Stenersen, who runs the Skjærgaarden nursery together with her husband Bjørge Madsen. “We want more robust and healthier plants, and to reduce our use of synthetic pesticides and artificial fertilisers. Of course, the fact that biochar also binds CO2 is an added benefit”, she says. “People are welcome to come and see for themselves how it works in practice”, says Maria Kollberg Thomassen, who is a Senior Researcher at SINTEF and Project Manager for CAPTURE+.

Biochar technology, which is not widely known in Norway, makes it possible to capture CO2 from the atmosphere and store carbon in the soil. It also offers benefits to the agricultural sector because it makes soils more nutrient-rich and counteracts the effects of drought conditions. Kollberg Thomassen picks up a handful of biochar from the plant, which is planned to convert biomass to biochar at a rate of about 300 kilograms per hour. This plant is designed for small-scale production and can be used by everyday farmers. “The project is ground-breaking because, on the one hand, we’re looking into how biochar technology can be improved by applying bio- and nanotechnologies”, says Kollberg Thomassen. “On the other, we’re studying the economic, social and political aspects linked to the use of a new technology”, she says. Sweden, Norway’s neighbour, is utilising biocoal to a much greater extent. Kollberg Thomassen has recently returned from a visit to the Swedish water and waste management company Stockholm Vatten. It utilises garden waste to produce biochar which is used to help cultivate trees and other plants in Stockholm. The process is profitable because the plants require less care. It also has the advantage of handling surplus water following heavy rain.

Cutting agricultural emissions in half

“If 4,000 Norwegian farms and nurseries produced biochar and mixed it with the soil, we could halve our emissions from the agricultural sector”, says Erik Joner at NIBIO. NIBIO is one of the partners in the CAPTURE+ project, and is the organisation with the longest track record in biochar research in Norway. In 2010, a research article was published in Nature estimating that 12 per cent of anthropogenic CO2 emissions can be captured in biochar each year without conflicting with other biomass utilisation objectives. Joner says that biochar contains stable carbon that is bound in the soil and does not return to the atmosphere. Coalification changes the molecular structure of the material such that bacteria and fungi are unable to break it down. When mixed with soil it constitutes about one half of one per cent of soil content.

In the Amazon region, NIBIO has found charcoal (biochar) formed from residual plant material in the soil that is between 1,000 and 1,500 years old. The soil here is still more fertile today than soils which have not been provided with such additions of carbon.

Black gold in the soil

Joner compares biocoal with humus, which he calls the “black gold in the soil”. It is humus that makes soil vital and nutrient-rich. Without it, trees and other plants would not be able to grow. But humus cannot be manufactured and, just like humus, biochar has the property of being able both to retain and then release nutrients to the plants. It is dark in colour, which means that when spring arrives, the sunlight rapidly warms the soil. It is both porous and excellent at retaining water, making it able to counteract drought conditions.

From straw to horse manure

NIBIO has estimated that the first two million tonnes of CO2 that can be bound each year in biochar in Norway can be sourced from easily accessible forestry and agricultural waste. “Norway’s natural vegetation is rewilding, and there’s a lot of forestry waste just lying around and rotting away”, says Joner. “Timber volumes in Norwegian forests have increased by 25 million cubic metres, but only 12 million of these are harvested. The forests will benefit from thinning aimed at promoting growth and healthy forests”, he says. An advantage of biochar production is that all kinds of organic material, from straw to horse manure, can be fed into a conversion plant. This means that biochar will not be in competition with biomass used for other purposes such as bio-based aviation fuels, which require higher quality raw materials. Biochar is produced by heating the biomass to temperatures of between 500 and 700 degrees while being supplied with limited volumes of oxygen (see the facts box).

Removing heavy metals from the soil

Professor Stephen Joseph from the University of New South Wales has been researching biochar for many years, and has visited Skjærgaarden to demonstrate how the plant works. He has observed how biochar is being used for everything from the removal of heavy metals from soil, to the positive results from tests carried out in Australia where cattle manure has been added, and how the Chinese have now started to invest in biochar, which they mix with artificial fertiliser. At the Skjærgaarden nursery, the initial plan is to mix the biochar with compost as a means of providing nutrients for plants and crops. Stenersen believes that biochar is an excellent agent for returning nutrients to the soil, and that it is a more natural and sensitive approach, similar to the methods used before artificial fertilisers became the norm. “We’re only in the starting blocks and it will take time for us to find our feet. But the possibilities are enormous”, she says. “Stephen Joseph has inspired us to carry out an experiment that involves mixing biochar with silicon-rich waste from larvikite quarries. This can be used in addition to, or as a replacement for, artificial fertilisers”, says Stenersen. Another benefit of adding biochar is that is raises the pH of the soil. Currently, Norwegian farmers use lime to increase pH values.

Markus Steen is a research scientist at SINTEF looking into the kinds of political measures required if biochar is going to become a means of mitigating climate change. He has also been studying the barriers that typically arise when a new technology is introduced. If biochar is to become a factor in Norway's climate change bookkeeping, a certification scheme must be established to make sure that the carbon remains in the soil. This is essential if a carbon compensation scheme, paying farmers to plough biocoal into the soil, is introduced. However, in terms of measures, biochar technology is more than just another carbon capture and storage technology. Steen believes that the technology will not make a breakthrough if it is simply promoted as a climate change mitigation tool. At SINTEF, we call biochar a “kinder egg” – on the basis of all the opportunities it offers. It has the potential to address many challenges, including reducing the need for fertilisers and perhaps also increasing crop yields. It is probably these positive aspects, rather than its effect on climate change, that will stimulate interest among the farmers.

Experiments in agriculture and waste management

Steen believes that during the start-up phase, it is important to provide incentives for establishing test plants at different scales, and in different parts of Norway. Users should be closely involved because this promotes interaction and confidence in the product. Currently, our levels of expertise in the field of biochar are limited, and there is a great need for information. “The public sector has an important role to play, and can take the lead in creating a niche market”, says Steen. “A good example of this is the inter-municipal waste management company IVAR, based in Stavanger and Sandnes in western Norway. IVAR is planning to invest in a biochar facility, from which the surplus heat will be used to heat public buildings”, says Steen. Jon Randby works in the agriculture division at the offices of the County Governor in Vestfold, and has been following developments at the demonstration plant at Skjærgaarden. He agrees with Steen that incentives to start testing must be implemented now. “Biochar offers major opportunities to farmers, and there is now a greater willingness in the farming community to test new initiatives than there was ten years ago”, he says. “For this reason, intensive research is needed to demonstrate that it works. We’re seeing that soils are becoming increasingly nutrient-poor, so we have to act now. Not least, we need climate change mitigation measures”, he says.

Elkem investing in a biochar plant

The chemical giant Elkem is one of the world’s largest producers of silicon and ferrosilicon and is planning to use more biochar in its production processes here in Norway. It intends to achieve this by increasing the proportion of biochar in its reducing agent mixtures used in the production of silicon and ferrosilicon to 20 per cent by 2021 and 40 per cent by 2030. This is equivalent to emissions reductions in Norway of 450,000 tonnes of CO2. Emissions reductions will be achieved by replacing fossil coal. “We’ve just started a four-year research project called PyrOpt, funded by the Research Council of Norway, in which our aim is to optimise the pyrolysis process used to manufacture biochar so that it meets Elkem’s requirements”, says Geir Johan Andersen, who is Project Manager for the PyrOpt project at Elkem.

The company is also aiming to exploit all pyrolysis by-products such as bio-oil, and surplus energy in the form of steam. There may also be some fractions of biochar that are more suited to purposes other than as a reducing agent. “We’re looking into opportunities to collaborate in the construction of a biochar plant of this type, and this is why it is useful to meet others and participate in demonstration projects such as that at Skjærgaarden”, says Andersen.