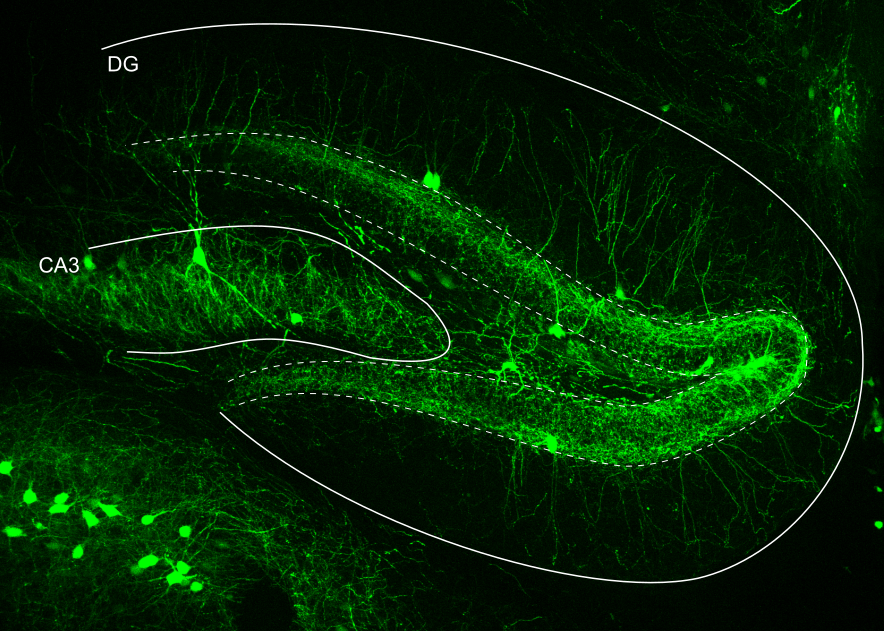 The hippocampus is essential to the memory and learning. This picture shows its characteristic form. The interneurons are highlighted in green, "Ammon's horn" (CA3), as the hippocampus is also known, and the dentate gyrus (DG) are outlined in white. Source: Marlene Bartos

The more we know about the billions of nerve cells in the brain, the less their interaction appears spontaneous and random. The harmony underlying the processing of memory contents has been revealed by Prof. Dr. Marlene Bartos' workgroup at the Institute of Physiology I. In a study written with a colleague from the Institute of Science and Technology Austria and published in the Nature Communications journal, she highlights the role of inhibiting circuits in the creation of high-frequency brainwaves in the hippocampus. With its work, the team, which also comes partly from the BrainLinks-BrainTools Cluster of Excellence and the Bernstein Center Freiburg, shows how the brain processes information that is relevant to memory.

"Researchers have suspected for a long time that frequencies over 30 Hertz coordinate the synchronous cooperation of various cell networks of the brain. It's also known that activity in this frequency range is markedly reduced in Alzheimer patients, for example," says Bartos, summing up the underlying idea of her research. But how do these signals, which are known as gamma waves, occur in several places simultaneously? And what does this mean for human memory in real terms? As experts in the field of synaptic links, Bartos and her team intensively studied the communication between what are called interneurons in the hippocampuses of mice. Situated between two or more other neurons, an interneuron is a cell type with especially short protuberances, which can effect a transmission of inhibiting impulses to its neighboring cells quickly and efficiently. "Similar to groups of instruments in an orchestra, there are small circuits in which inhibitory interneurons play an important part," explains Bartos. "You could imagine their role as being like that of the conductor, who makes the horns retreat into the background at points, in order to give them full weight once more the next moment." The most important observation of the study was that, when they are roused from their rest, the surrounding cells are receptive to certain information.. Then they are stimulated to develop a common potential for action, so that a signal can be transmitted to other neurons. This in turn can be measured electrophysiologically as a discharge of gamma waves. "The interesting aspect of this is that the micro-circuits do not interfere with one another, but can store or access various information in parallel, such as the attribute form and color of an object. This allows simultaneous, parallel processing and the storage of information. We believe that this is how the initial traces of memory are laid," says Bartos.

However, in order really to track down what makes memory, a lot more fundamental research is still required. Bartos and her team are working at top speed to make their findings usable for the treatment of neurodegenerative diseases within a few years.

Read "The strength of the minority" article on Marlene Bartos' research in the University magazine uni'leben: