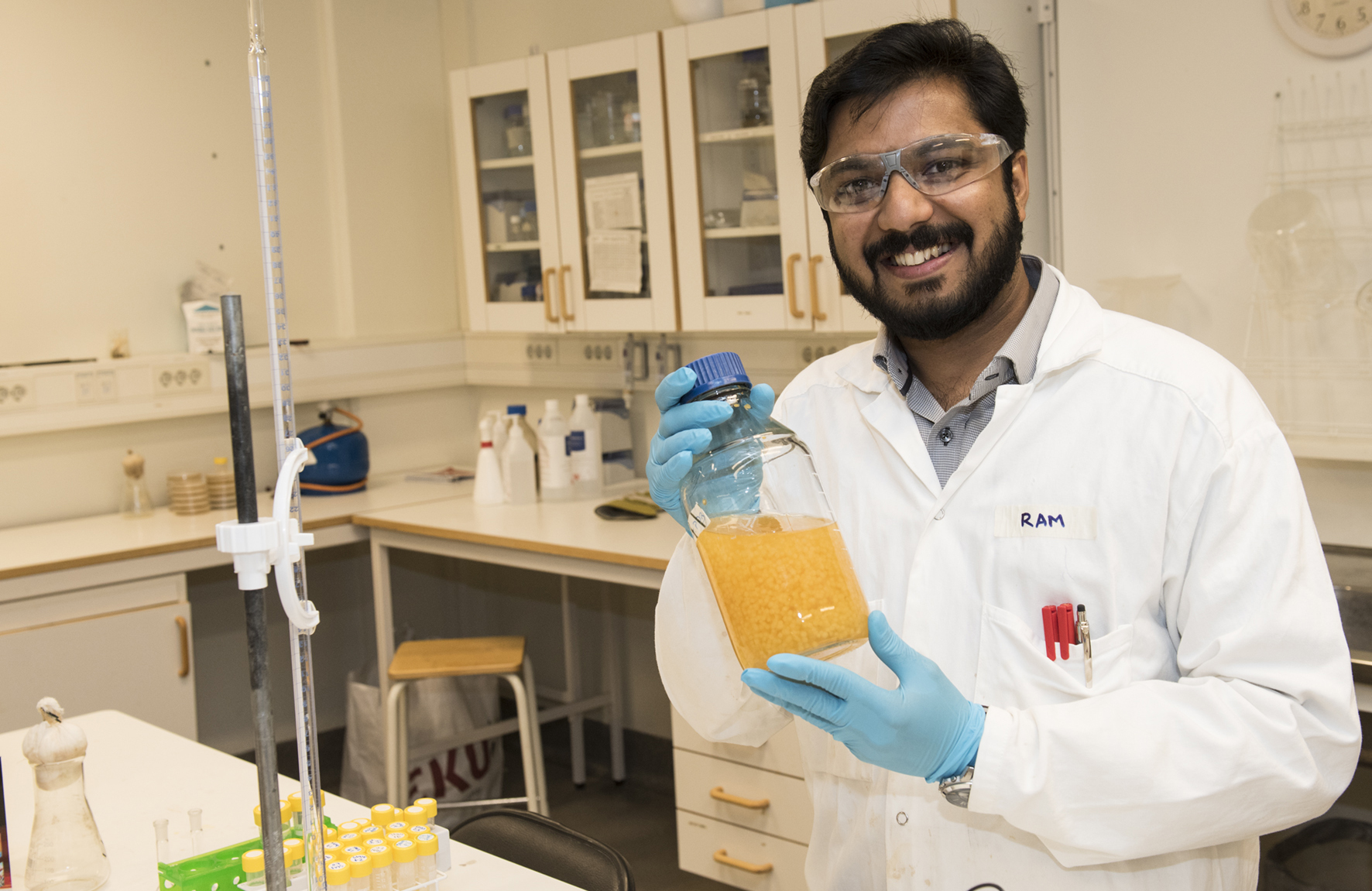 It is possible to produce bioethanol from agricultural and industrial waste in existing plants in a socioeconomically sustainable way. A research project has been carried out by doctoral student Ramkumar Nair at the University of Borås, Sweden, where he verified a new process model. “I have been verifying a process that we hope will work in an industrial scale, when it comes to using existing ethanol factories”, he says. “Thanks to that process, the industry can become more sustainable and use agricultural or industrial waste for the production of bioethanol.” Bioethanol is used for fuel for ethanol cars, among other things. Usually, wheat, sugar canes, or corn are used for ethanol production. In Sweden, wheat is the most common.

No need for major investments

“This means that agricultural residues, such as straw, bran, or the like could be used for making ethanol without making any major investments in the factories. All we need is already there. You can use the factories existing reactors. This also eliminates the burden of using foodstuff to produce vehicle fuel.” In his research, Ramkumar has analysed the structure of the first generation ethanol processes and found out where the focus should be. The biggest challenge was not to add chemicals to break down the waste material for the ethanol process, as the residues from the ethanol factories among other things will be used for animal feed. “What we added should not stop the fermentation”, says Ramkumar Nair. “After several tests, the choice was to add phosphoric acid. It is good for the animals that eat the leftovers and it gives good results in the ethanol fermentation process.” The entire method was first tested in a small scale in the lab at the University of Borås, later in a larger facility at Borås Energi och Miljö, and finally on an even larger scale at SEKAB in Örnsköldsvik.

In order to succeed with the integration, an edible filamentous fungus was used, Neurospora intermedia, which is a fungus used for human consumption, for example in Indonesia. The fungus has a good ability to produce ethanol and is also a good ingredient in animal feed due to its high protein content. This fungus is easy to grow in a lab environment. “One difficulty when using the fungus is that it has a tendency to clump, which creates challenges in the industrial process. But I have managed this fungus to form small balls or pellets instead of lumps. There are other fungi that form pellets, but I am the first one to have made the Neurospora intermedia to do it. Pellets do not get stuck; they roll off, and are better for the fermentation process in some instances.” It was complicated to find out how to do it, but once it was done the method for making the fungus form pellets instead of lumps is quite simple. Now the project will hopefully continue at the industry, to develop and fine-tune the process at a larger scale. The entire concept of integration and the results are now included in a patent owned by Lantmännen Agroetanol, which is one of the partners of Ramkumar Nair’s research project. “Now there is a research-based verification for the process, so the industry can carry on and continue to develop it”, says Ramkumar Nair. “I hope that in a few years, I will see a large-scaled first generation ethanol factory that produces bioethanol from agricultural waste, using this integration model.

Ramkumar Nair publicly defended his doctoral thesis in the field of resource recovery at the University of Borås, 6 October. Principal supervisor: Professor Mohammad Taherzadeh. Assistant supervisor: Senior lecturer Patrik Lennartsson. The research project was mainly financed by Formas, A Swedish Research Council for Sustainable Development, and the Swedish Energy Agency. The project has been carried out at the Swedish Centre for Resource Recovery at the University of Borås, Sweden. Read the doctoral thesis, "Integration of first and second generation bioethanol processes using edible filamentous fungus Neurospora intermedia": http://hb.diva-portal.org/smash/record.jsf?pid=diva2:1128276

Read more about the research at the Swedish Centre for Resource Recovery: http://www.hb.se/en/Research/Areas/Swedish-Center-for-Resource-Recovery/