Spliceosome: how the right information is propagated in cells 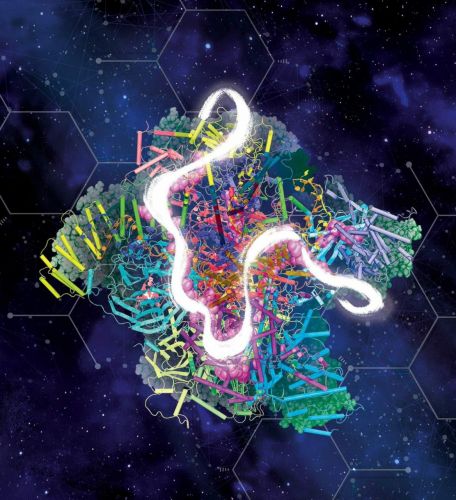 A new study of the ‘Istituto Officina dei Materiali’ (IOM) of the Italian National Research Council (CNR) in association with Sissa (International School for Advanced Studies) sheds light on how the spliceosome works. It is a complex cellular system, composed of proteins and RNA, responsible for a “cutting and sewing” process with which protein synthesis is carried out. Defects in its functioning are involved in more than 200 diseases. The study has recently been published on the Journal of the American Chemical Society, which also dedicated the cover to it.

Research based on computer simulations at the ‘Istituto officina dei materiali’ (IOM) of the Italian National Research Council (CNR) conducted in association with Sissa – International School for Advanced Studies and published in the Journal of the American Chemical Society, has permitted to explain the “spliceosome” function, an important “biological machine” for cellular life. For protein synthesis to occur, one gene (namely a DNA sequence) is initially copied onto a molecule called RNA messenger or mRNA, in turn in charge of transporting the information contained in the DNA to other cellular apparatuses, which start protein synthesis. Nevertheless, the RNA messenger that is copied from the gene is in a premature form and must follow a few steps before it can be used.

“In genes, the useful information for protein synthesis is contained in sequences called exons, interspersed with long stretches which do not contain such information, called introns. These must be cut away, with a mechanism called splicing. Once the introns are removed, the exons must be sewn back together to have a filament of mature mRNA containing all the information needed to synthesise proteins. This is where the spliceosome comes into play, a macromolecular complex composed of hundreds of proteins which act as a tailor that, cutting and sewing, regulates this cellular mechanism,” explains Alessandra Magistrato of Cnr-Iom and project coordinator.
The slightest error in this process can alter the information, with serious repercussions on human health. The faults of splicing are in fact responsible for about 200 diseases including at least 33 types of tumours. “The new study explains, at the level of atoms, how the complicated structural changes in the spliceosome occur that are necessary to position introns and exons in the optimal position to perform splicing”, continues the researcher. “This happens through an exchange of signals between the different protein parts which make up the system”.

“All the proteins which make up the spliceosome communicate with each other in order to act in a coordinated manner and accurately regulate the cutting and sewing process. In practice, through small local rearrangements, an exchange of signals is triggered and progressively propagated between adjacent proteins, to cover large distances”, explains Andrea Saltalamacchia of Sissa and lead author of the study. “Given the involvement of this system in numerous human diseases, understanding the mechanism of transmission of these signals could allow to identify drugs which, blocking communication, interfere with splicing, and may therefore represent possible new therapies”.
The complexity of this system is such that the research is now only taking its first steps towards a full understanding at atom-level. This however is essential for the identification of inhibitors necessary for the treatment, and sometimes prevention, of numerous related diseases.
“Our study is carried out with sophisticated simulations, possible thanks to the use of modern supercomputers, which allow us to see with atom-level resolution how this cutting and sewing process occurs”, concludes Magistrato. The research has been conducted with the contribution of the University of Yale and of Bologna, which has helped to identify the path followed by the exchange of information, and of the University of San Diego and of the National Institute of Chemistry Ljubljana, which collaborated in the initial phases of the project.