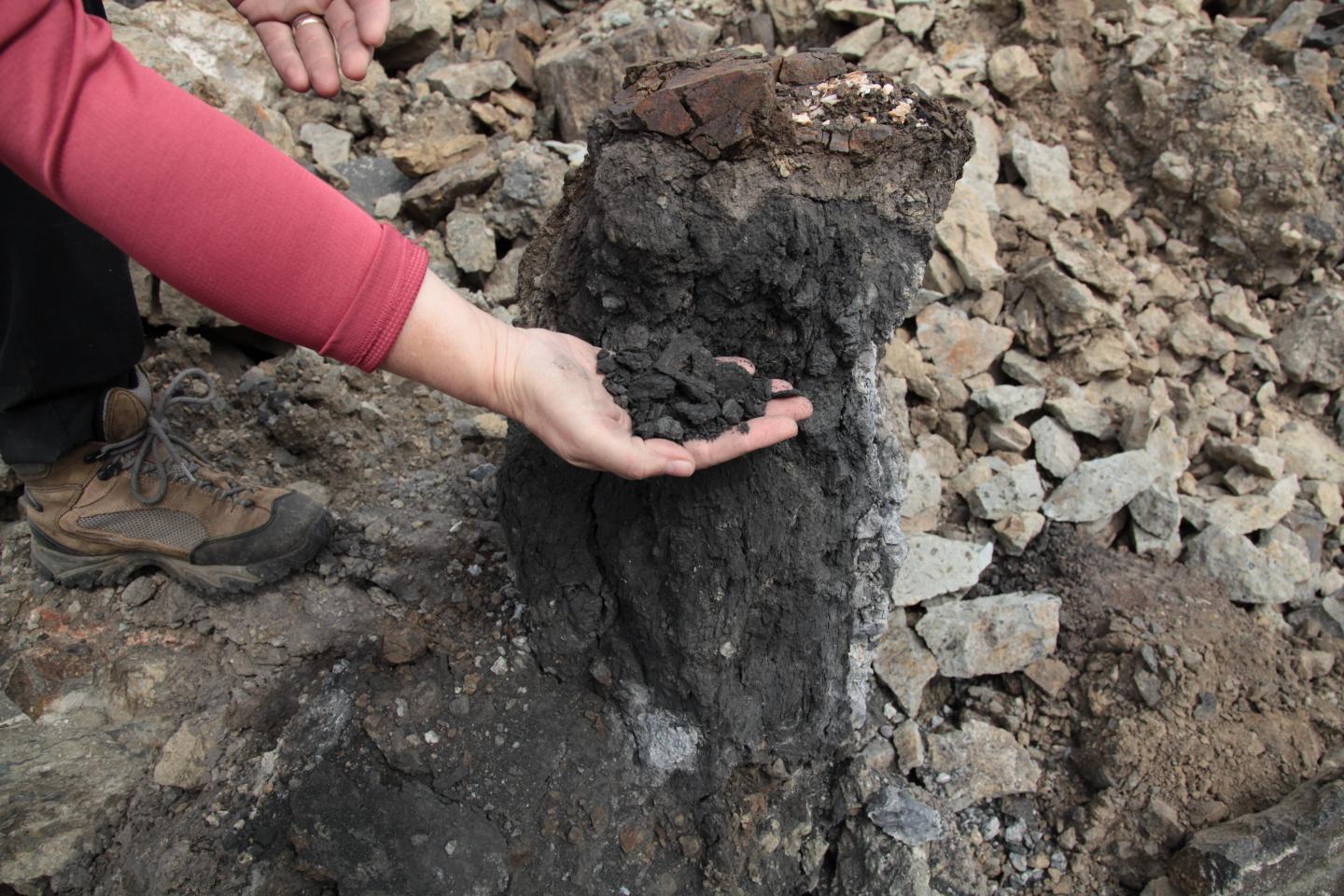 A lump of coal weathering out from Siberian flood basalts in a quarry near the town of Ust Ilimsk Credit:  Scott Simper

A team of researchers led by Arizona State University (ASU) School of Earth and Space Exploration professor Lindy Elkins-Tanton has provided the first ever direct evidence that extensive coal burning in Siberia is a cause of the Permo-Triassic Extinction, the Earth's most severe extinction event. The results of their study have been recently published in the journal Geology.

For this study, the international team led by Elkins-Tanton focused on the volcaniclastic rocks (rocks created by explosive volcanic eruptions) of the Siberian Traps, a region of volcanic rock in Russia. The massive eruptive event that formed the traps is one of the largest known volcanic events in the last 500 million years. The eruptions continued for roughly two million years and spanned the Permian-Triassic boundary. Today, the area is covered by about three million square miles of basaltic rock.

This is ideal ground for researchers seeking an understanding of the Permo-Triassic extinction event, which affected all life on Earth approximately 252 million years ago. During this event, up to 96% of all marine species and 70% of terrestrial vertebrate species became extinct.

Calculations of sea water temperature indicate that at the peak of the extinction, the Earth underwent lethally hot global warming, in which equatorial ocean temperatures exceeded 104 degrees Fahrenheit. It took millions of years for ecosystems to be re-established and for species to recover.

Among the possible causes of this extinction event, and one of the most long-hypothesized, is that massive burning coal led to catastrophic global warming, which in turn was devastating to life. To search for evidence to support this hypothesis, Elkins-Tanton and her team began looking at the Siberian Traps region, where it was known that the magmas and lavas from volcanic events burned a combination of vegetation and coal.

While samples of volcaniclastics in the region were initially difficult to find, the team eventually discovered a scientific paper describing outcrops near the Angara River. "We found towering river cliffs of nothing but volcaniclastics, lining the river for hundreds of miles. It was geologically astounding," says Elkins-Tanton.

Over six years, the team repeatedly returned to Siberia for field work. They flew to remote towns and were dropped by helicopter either to float down rivers collecting rocks, or to hike across the forests. They ultimately collected over 1,000 pounds of samples, which were shared with a team of 30 scientists from eight different countries.

As the samples were analyzed, the team began seeing strange fragments in the volcaniclastics that seemed like burnt wood, and in some cases, burnt coal. Further field work turned up even more sites with charcoal, coal, and even some sticky organic-rich blobs in the rocks.

Elkins-Tanton then collaborated with fellow researcher and co-author Steve Grasby of the Geological Survey of Canada, who had previously found microscopic remains of burnt coal on a Canadian arctic island. Those remains dated to the end-Permian and were thought to have wafted to Canada from Siberia as coal burned in Siberia. Grasby found that the Siberian Traps samples collected by Elkins-Tanton had the same evidence of burnt coal.

And the changes at the end-Permian extinction bear remarkable parallels to what is happening on Earth today, including burning hydrocarbons and coal, acid rain from sulfur, and even ozone-destroying halocarbons.

"Seeing these similarities gives us extra impetus to take action now, and also to further understand how the Earth responds to changes like these in the longer term," says Elkins-Tanton.