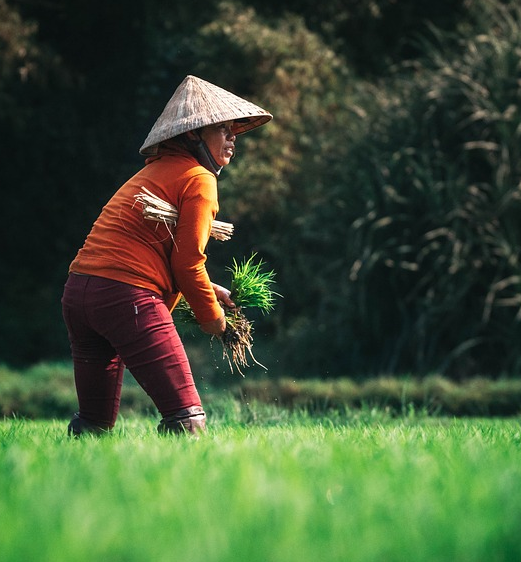 Antibiotics, and resistant bacteria, may remain in the harvested crop and enter the human food chain, especially in food that is not thoroughly cooked. Additionally, after spraying, much of the antibiotic can remain unspent in the soil. There are growing concerns this creates a reservoir of resistance in the environment.

The research provides rare data on the use of antibiotics in arablefarmingin the developing world and supports anecdotal reports of their widespread use on crops in Vietnam, Cambodia and China, as well as claims by a leading research and advocacy organisation in India, the Centre for Science and Environment (CSE) that crop farmers are flouting national protocols andliberally using streptomycinand tetracycline. Erik Millstone, a science policy expert and specialist in food safety policy at the University of Sussex who was not involved in the study, says: “Food safety regulators nationally and internationally have been doing a sloppy job letting this slip under the radar and the very least I hope the publication of this paper achieves is triggering a wave of attention and action on the part of national and international regulatory authorities.”

The research was carried out by plant pathologists from the Centre for Agriculture and Bioscience International (CABI), an intergovernmental agricultural research and dissemination organisation. CABI, the parent organisation ofSciDev.Net, trains grassroots agricultural advisers in lower-income countries, who are often employed by national agricultural ministries.

Taylor and Reeder, Plantwise data manager, examined more than 430,000 consultation records these ‘plant doctors’ submitted between 2012 and October 2018. There were no records of antibiotic recommendations in any of the 12 African countries in the study, nor in most of the countries from South and Central America; and use in eastern Mediterranean countries was low.

But in South-East Asia (which, using the WHO categorisation, includes India and Nepal) and the Western Pacific, plant doctors regularly recommended antibiotics – most commonly for rice, followed by tomato and citrus fruit. While 65 per cent of these recommendations were for bacterial diseases – over which experts are divided on efficacy – one in five were for insects or mites, against which antibiotics have no effect.

In many cases, especially in South-East Asia, “the recommendations were identical regardless of the diagnosis,” say the researchers.

“We speculate that the agricultural advisors in South-East Asia routinely combine an insecticide with a fungicide and an antibiotic in a single application so as to deal with the current issue and to prevent/control other problems not yet present or residing at a low level.” Reeder and Taylor say there was “enormous variation” between the six South-East Asian countries in the study (Bangladesh, India, Myanmar, Nepal, Sri Lanka and Thailand) but national figures were not included.

The data supports reports of widespread use in some countries. Ricardo Oliva, an expert in plant resistance at the International Rice Research Institute in the Philippines, says he has often seen streptomycin on sale to farmers in markets in Vietnam and Cambodia. “You see the boxes thrown in the field… it’s part of the culture,” he says. And in November the Delhi-based CSE reported on its visits to 15 farmers across India chosen to represent a variety of terrains and produce.

All acknowledged using streptomycin on their crops, according to Amit Khurana, director of the CSE’s food safety and toxins programme. Subsequent interviews and desk research revealed that different agricultural boards and government colleges in a variety of states recommend their use. The degree of risk is controversial. Advocates of antibiotic use argue there is “no proven evidence of resistance having spread from plant pathogenic bacteria to human or animal pathogens despite 50 years of use”, say Reeder and Taylor.

But Jan Leach, an expert in plant-pathogen interactions at Colorado State University says transmission in the opposite direction (resistance genes from bacteria that infect humans have been found in plant pathogens) has been demonstrated, meaning that “we know that there is movement of antimicrobial resistance between plant pathogens and human pathogens”.

“We see the spread of diseases all the time and the big concern is that if you get these resistances into these pathogen groups and then they move from country to country, or in wind patterns … we don’t know how widespread these things can become,” says Leach. Experts disagree about whether it is ever justifiable to use antibiotics in crops.

Common diseases such as rice bacterial blight can be devastating, says Leach. “These are resource-poor famers and they are dealing with very tiny pieces of land. And if they lose their crop they don’t have food for their families ... so these diseases are bad and they have a high impact.” But antibiotics often do not work even against bacterial diseases. Leach says it is better to adopt new varieties bred for resistance to local diseases and use good management practices.

Oliva adds: “It’s my personal opinion but I would never advise the use of antibiotics [on rice].” The researchers highlighted the lack of data on antibiotic use on crops. Aninvestigationby the Food and Agriculture Organization (FAO), World Organisation for Animal Health and WHO found that only three per cent of countries did regular assessment of the types and amounts of antibiotic used on crops. Regulations also vary widely. Many countries have no legislation and some encourage the practice as a valuable tool against infection, the investigation says. The European Union and Brazil do not approve any antibiotic as an active ingredient in pesticides; some countries, such as the United States, allow their use in emergencies. Last year the US Environmental Protection Agency controversially allowed farmers to sprayhundreds of tonnes of human antibiotics, including streptomycin, in orchards to combat the disease citrus greening. The FAO convened an expert meeting in 2018 to assess the risks posed by antibiotics entering the soil and the environment.

Jeffrey Le Jeune, food safety and quality officer at FAO, says: “We don’t have very much data to say what is the relative contribution to the whole human exposure through crops. That’s the bottom line.

Khurana, from India’s CSE, adds: “It’s difficult to understand how the global scientific community is really not focussed on this. The FAO [needs to] show a similar kind of aggression [towards crop antibiotic use] to the way they are showing it on the animal side.”