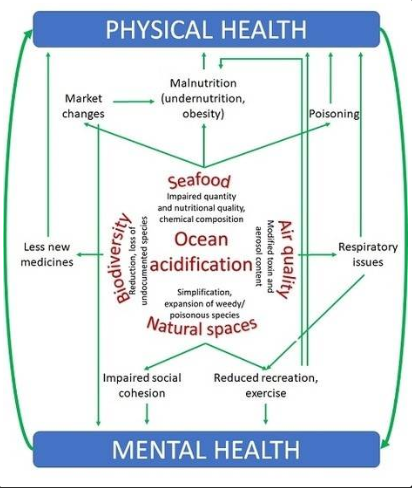 While ocean acidification was initially perceived as a threat only to the marine realm, the authors of a new publication argue that it is also an emerging human health issue.

The global threats from carbon dioxide (CO2) accumulating in the world’s oceans and driving ongoing ocean acidification are becoming increasingly evident. As humans extract and burn fossil fuels and drive deforestation, CO2in the atmosphere increases, with levels now far exceeding those that occurred in preindustrial times. Of the released CO2, around 25% is taken up by the oceans where it interacts with seawater and forms carbonic acid, leading to a reduction in pH, an increase in acidification, and an alteration of carbonate chemistry. The average surface pH of the ocean has already decreased by 0.1 unit since the beginning of the Industrial Revolution, and a further 0.3–0.4 unit decrease is expected by the end of the century. As pH is measured on the logarithmic scale, this corresponds to a doubling in acidity by 2100. These changes are happening at an unprecedented scale and speed, rapidly exposing marine ecosystems to conditions they have not experienced over millions of years.

A wide range of organisms, from bacteria to fish, have been demonstrated to be negatively impacted by ocean acidification. As acidification progresses, many organisms must invest additional energy to maintain their acid-base balance, metabolic processes, or other biological functions, with consequences for their growth, reproduction, and survival. Consequently, around 50% of all the species tested in the laboratory have shown negative responses to ocean acidification. On the other hand, some photosynthetic organisms can benefit from the increased concentration of CO2where it is used for photosynthesis.Such changes at the organism level can modify the balance between species and drive profound ecosystem changes that influence human health and well-being. Negative impacts of ocean acidification are already visible in some parts of the world; for example, theobserved collapse of the oyster aquaculture industry along the west coast of the United States in 2007has been attributed to ocean acidification. Such impacts, and consequences on human health and well-being, are anticipated to intensify with future acidification.

"Ocean acidification will impact humans in many more ways than are traditionally considered. It has wide-ranging implications including the accessibility and quality of food that we eat, it will affect the air that we breathe, the medicine we need and the views that we enjoy", saysDr. Richard Bellerby, professor and chief scientist at The Norwegian Institute for Water Research (NIVA) and co-authorof the recent paper.

As such, the authors highlight here that ocean acidification is very much an emerging human health issue of substantially greater complexity, and possibly scale, than currently appreciated.Given howocean acidificationimpacts on human health and well-being, recognizing and researching these complexities may allow the adaptation of management such that not only harms to human health are reduced, but the benefits enhanced.