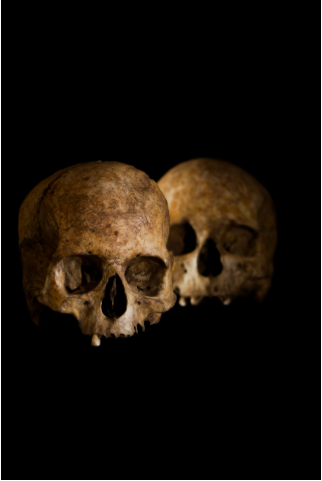 "These elements display various characteristics that make it an exceptional archaeological find. The differential treatment of skulls with traumatological evidence along with sacrificed animals, as well as the documented archaeological structures and materials do not match the normative funerary record we were working with until now. This discovery is of great importance not only because of its peculiarity, but also because it constitutes a sealed, intact ritual deposit, which is a great opportunity to gain a more detailed insight into the funerary and ritual behaviours of the Neolithic populations of the Iberian Peninsula", emphasises professor García Rivero.

This work contributes in a particular way to the knowledge of the funerary rituals of the middle part of the 5th millennium before Christ, currently the least well known period of the Neolithic populations of the Iberian Peninsula as a whole. The scarce funerary record from that time shows fundamentally individual burials, with secondary burials being unusual. The sort of context just discovered is really extraordinary. Burials usually occur in areas of habitat, and are mostly associated with remains of ceramics and shells, as well as homes, which reflect the importance of activities related to the use of fire, but without stone structures like those now documented in the mountains of Cádiz.

The study and review of the entire funerary record of this period allows us to offer a kind of cultural mosaic in relation to the funerary and ritual traditions of these peasant and herding populations, with a probable division between the Andalusian region and the eastern seaboard of the peninsula, the two regions where most data is available today.

The 2017 archaeological campaign in Cueva de la Dehesilla received financial support from various entities and programmes at the University of Seville and the Research Centre for Anthropology and Health at the University of Coimbra This research was carried out within the framework of the projects 'High-resolution chronology and cultural evolution in the South of the Iberian Peninsula (circa 7000-4000 cal BC): a multiscalar approach', of the Ministry of Science and Innovation.

Twitter
Tweet
Altro in questa categoria: « Analysis Reveals Heart-Related Side Effects of Hydroxychloroquine and Chloroquine Penicillium camemberti: a history of domestication on cheese »