Water is a probable vector for mammalian virus transmission 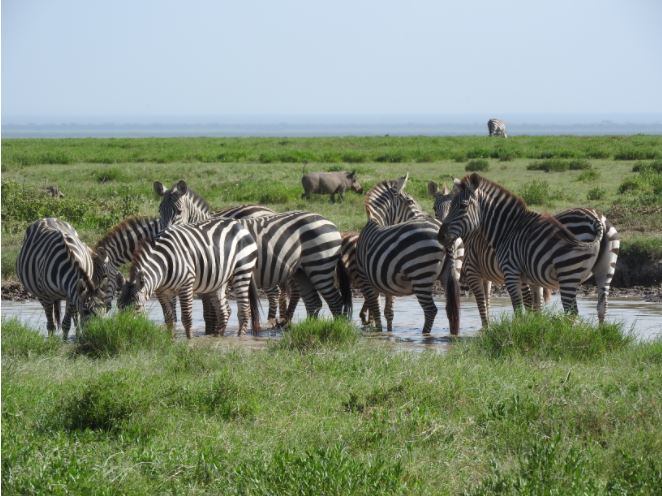 A dazzle of zebras at a waterhole in East Africa. Seasonal waterholes can operate as key locations for pathogen transmission within and between species.

Water is a necessity for all life but its availability can be limited. In geographical areas experiencing dry seasons, animals congregate near the few freshwater sources, often reaching large densities. At these sites many animals from different species come to the same spots to drink, potentially operating as key locations for pathogen transmission within and between species. An international team of scientists lead by the German Leibniz Institute for Zoo and Wildlife Research (Leibniz-IZW) suggests that viruses can use restricted freshwater sources as a vector to be spread among animals. The key prediction of this idea is that animal viruses remain stable and infectious in water. The team tested this idea by sampling water holes in ecosystems of Africa and Mongolia with pronounced dry seasons and growing viruses in such water. The scientific results demonstrated that this was indeed possible and are published in “Science of the Total Environment”.

The distribution of freshwater varies geographically and seasonally, with places such as East Africa and Central Asia experiencing pronounced seasonal shortages. Water scarcity results in frequent, unstable congregations of numerous wildlife species in the vicinity of freshwater sources. The objective of the scientific research work was to determine whether viral stability in restricted water sources is sufficient for some mammalian viruses, thereby enabling their spread through the medium of water. Equine herpesviruses (EHV) were selected as a model as they are known to remain stable and infectious in water for weeks under laboratory conditions and circulate in wildlife in both Africa and Mongolia. “We knew from our previous work, particularly with zebras in Africa, that equids become stressed when they are forced to aggregate in the dry season. When we looked at the effects of stress in captive zebras, we could see that it was associated with shedding of EHVs into the environment. This suggested that just at the time when animals are forced to congregate, they are most likely to be stressed and shed viruses. The stress is acting as a sort of signal to the virus to get into the water to infect more individuals,” says Prof Alex Greenwood, the leader of this scientific work.

“Congregations also help explain some odd results from both captive and free-living wildlife, such as the infection of non-equids with EHVs, for example, rhinos,” explains Dr Peter Seeber from the Leibniz-IZW who collected water and zebra samples in East Africa. “If rhinos share the water with equids, they are likely exposed to the virus,” adds Dr Sanatana Soilemetzidou form the Leibnz-IZW, who collected the water and animal samples in Mongolia.
To be validated, the entire concept of water as a viral vector hinged on showing that EHV remain stable in environmental water. “We were unsure what to expect given that culturing viruses from the environment is challenging given all the other microbes that can grow when you try to isolate a virus,” comments Dr Anisha Dayaram, the lead author from the Leibniz-IZW. Dayaram and her colleagues succeeded in doing exactly that, using the water samples collected from both Africa and Mongolia. Under cell culture conditions they demonstrated that EHVs could indeed replicate and remained infectious.
This seems to explain the rather odd result that EHVs seem to show limited viral evolution. Viruses tend to evolve rapidly but EHVs change little over time and are in this sense surprisingly stable.

The EHVs found in Mongolia and Africa are nearly identical to those in domestic horses. This may represent a constraint or equilibrium state for the EHV found in water holes. “Our results suggest that the stability of EHV in water may be the result of a long evolutionary process, which has led such viruses to be truly adapted to using water as a vector,” explains Dr Alexandre Courtiol, another Leibniz-IZW scientist involved in this scientific work.

EHVs are not the only viruses that can be shed into and spread through water. Further research should uncover whether other viruses may use water in a similar way as vector to spread among animals. The work also suggests that understanding viral dynamics will require looking beyond virus host interactions in some cases and should include adaptations to transmission via the environment.

The mystery of a Picasso unveiled b...