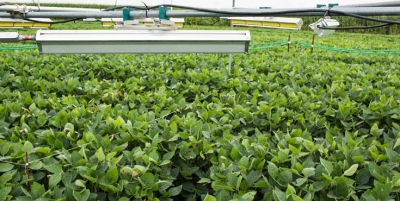 “Our climate system and atmosphere are not changing in isolation from other factors—there are actually multiple facets,” says USDA/ARS scientist Carl Bernacchi, an associate professor of plant biology at the Carl R. Woese Institute for Genomic Biology at the University of Illinois. He is affiliated with the Department of Crop Sciences in the College of Agricultural, Consumer and Environmental Sciences. “The effect of carbon dioxide in and of itself seems to be very generalized, but neglects the complexity of adding temperature into the mix. This research is one step in the right direction towards trying to figure out a way of mitigating those temperature-related yield losses that will likely occur even with rising carbon dioxide concentrations.” Published in the Journal of Experimental Botany, this study found the modified crop yielded more when subjected to both increased temperature and carbon dioxide levels; however, they found little to no difference between the modified and unmodified crops grown in either increased temperature, increased carbon dioxide, or today’s climate conditions.

This work suggests that we can harness genetic changes to help offset the detrimental effects of rising temperature. In addition, Bernacchi says, it illustrates that we cannot deduce complicated environmental and plant systems to increasing carbon dioxide levels increase yields and increasing temperature reduce yields. “Experiments under controlled conditions are great to understand concepts and underlying mechanisms,” says first author of the study Iris Köhler, a former postdoctoral researcher in the Bernacchi lab. “But to understand what will happen in a real-world situation, it is crucial to study the responses in a natural setting—and SoyFACE is perfect for this kind of study.” SoyFACE (Soybean Free Air Concentration Enrichment) is an innovative facility that emulates future atmospheric conditions to understand the impact on Midwestern crops. These findings are especially remarkable because the crops in this SoyFACE experiment were exposed to the same environmental conditions (i.e. the sun, wind, rain, clouds, etc.) as other Illinois field crops. “It’s actually a bit of a surprise,” Bernacchi says. “I’ve been doing field research for quite some time, and variability is one of the things that’s an inherent part of field research. Of course, we did see variability in yields from year to year, but the difference between the modified and unmodified plants was remarkably consistent over these three years.”

These modified soybeans are just one part of the equation to meet the demands of 2050. This modification can likely be combined with other modifications—a process called “stacking”—to further improve yields. “When we’re trying to meet our food needs for the future, this specific modification is one of the many tools that we’re going to need to rely upon,” Bernacchi said. “There is a lot of research across the planet that’s looking at different strategies to make improvements, and many of these are not mutually exclusive.” The paper, “Expression of cyanobacterial FBP/SBPase in soybean prevents yield depression under future climate conditions,” is published by the Journal of Experimental Botany (10.1093/jxb/erw435). Co-authors also include: Ursula M. Ruiz-Vera, postdoctoral researcher at the University of Illinois; Andy VanLoocke, assistant professor at Iowa State University; Michell Thomey, USDA-ARS Research Plant Physiologist and postdoctoral researcher at Illinois; Tom Clemente, Eugene W. Price Distinguished Professor of Biotechnology at the University of Nebraska–Lincoln; Stephen Long, Gutgsell Endowed Professor of Plant Biology and Crop Sciences at Illinois; and Donald Ort, Robert Emerson Professor of Plant Biology at Illinois.