Study shows how brain’s connections changes according to age 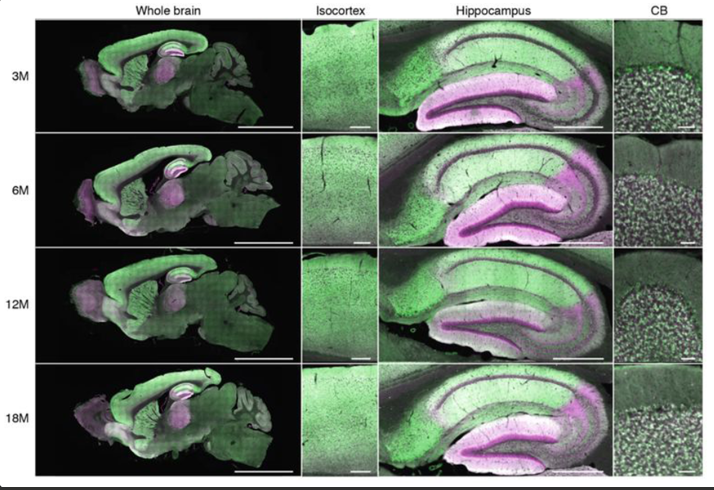 Changes in the entire brain (left) and hippocampus (middle) are evident in these images shot during the course of a mouse's life. Green shows the protein PSD95 and cyan is the protein SAP102.

Why do children think and behave differently from adults? Why do we become forgetful in old age? Researchers have shown for the first time how the connections between the brain’s nerve cells, the synapses, change over the course of life, and likely affect our processing of information.

As you age, you may have correctly suspected that your brain is changing along with the rest of your body. In a study published in Science last week, researchers reported the unprecedented mapping of molecular changes in the brains of 50 mice over time – down to the individual synapses. These changes in molecular make-up are distributed throughout the regions of the brain and they likely influence our cognitive development and susceptibility to brain disorders as we advance in age, says the study’s co-author, Erik Fransén, professor at KTH Royal Institute of Technology’s and a researcher with SciLifeLab.

“We have looked at molecules of billions of individual synapses across the brain in miceagedfrom newborn to old,” Fransén says. “We find a remarkable variation in synapse types. Different brain regions have different types and this mix of types changes as we age.”

In other words, after we reach our mid-30s, our brain synapses become less diverse and regions become more similar.
The study was a collaboration between researchers from KTH and University of Edinburgh.
This first-ever catalog of synapses across the lifespan contributes to our understanding of how the brain works. Synapses are believed to be the storage place for memories and they direct the flow of information when we think and act, Fransén says. They also are implicated in many diseases of the brain.

“Knowing which synapses change with old age could for instance give clues to why we forget certain things but not others,” he says.

Using information from the experiments on how regions develop, Fransén constructed a model of synapses found in the brain region called the hippocampus, which is where memories are formed. He found that at a young age, synapse compositions are not so different from each other, but during maturation they become increasingly more varied. After a plateau during adulthood (from about 20 to 35 years), the number of synapse variants decreases again.

The model showed that in the adult brain, when separate inputs are sent in, different inputs produce different outputs. Conversely, in the young or aged brain, the outputs become more similar.

“One can speculate that the wealth of differences in composition between brain regions and ages is related to an evolutionary adaptation in which the demands of the child, youth, the adult and the elderly are all different,” he says. “The development of our synapses shows a continuous change throughout life.”

Twitter
Tweet
Altro in questa categoria: « A preclinical study shows that hydroxychloroquine has no antiviral effect on SARS-CoV-2 in vivo Antidepressant inhibits coronavirus »