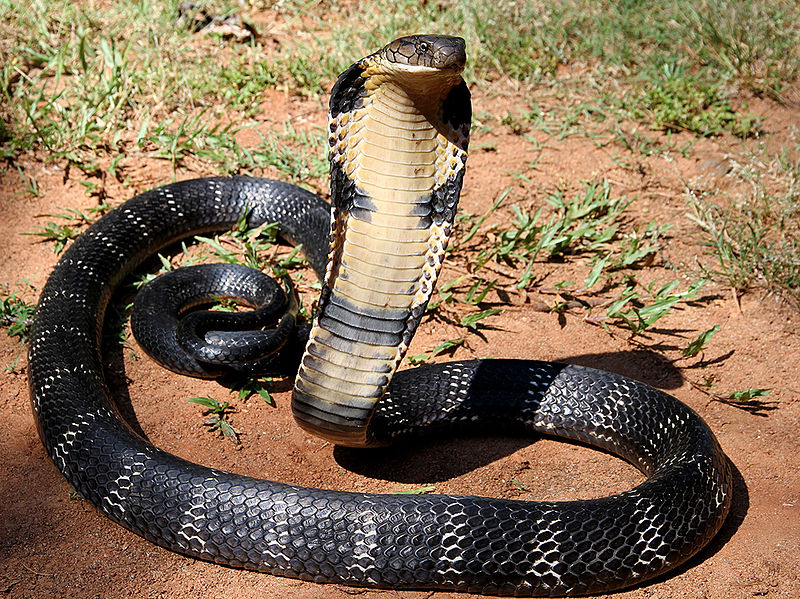 King cobras are a very dangerous type of snake, and one that is extremely well known. They inhabit many places, including Northern India, East to Southern China, South Malay Peninsula, East to Western Indonesia, and finally the Philippines. They are very large, their average size being 10-12 ft (3-3.6 m), but in some cases they have been documented to grow up to 18 ft (5.4 m) in length. Their lifespan is 15 to 20 years in the wild as well as in captivity.

PHYSICAL ATTRIBUTES
The full grown king cobra has yellow, green, black, or brown colouration. Their yellowish patternings are across and under their body, as seen in the picture on the first page of this article. Snakelets, on the other hand, are completely jet-black; although they do have yellow patterning. Their eyesight is significantly better than the majority of snakes, being able to see a human being from 330 ft (100 m) away.

FANGS AND VENOM
This snake’s fangs are short, usually 0.5 in (8-10 mm), considering that they are located in the front of the mouth. The king cobra has very deadly venom, making the victim paralyzed and unable to breathe, and can even end lives; although this does not happen very often. Since this snake is very well known and has caused fatalities in the past, medicines are used to treat it, for example Nyloxin and Cobroxin.

BEHAVIOR AND TEMPERAMENT
These snakes are very dangerous, and are not one to be messed with. They are not as aggressive as their reputation might suggest, and only strike and bite when provoked, threatened, orhunting. Their hiss is very loud, sounding more like a dog’s growl than a common snake. When threatened, they can flatten out their ribs and make their upper body into a hood, which is what they are most known for.

HABITAT
King cobras prefer to spend their time near streams where the humidity and temperature is constant, causing them to be able to shed properly and regulate their body heat. They live in closed or open forests, bamboo thickets, and lastly dense mangrove swamps.

REPRODUCTION
In this species, breeding occurs from January to April. They are oviparous, meaning they lay eggs (about 21-40 of them) instead of giving live birth. Both the male and the female guard the unhatched young, the female being the one guarding close while the male is somewhere nearby.

DIET
The king cobra usually feeds on other snakes, even smaller cobras (which is why it is given the name ‘king of cobras’). They usually feed on harmless species like Asain rat snakes, pythons, and dhamans, yet they will also feed on venomous snakes like kraits and cobras. Some of these specimens will only eat one type of snake, as they can have taste preferences.